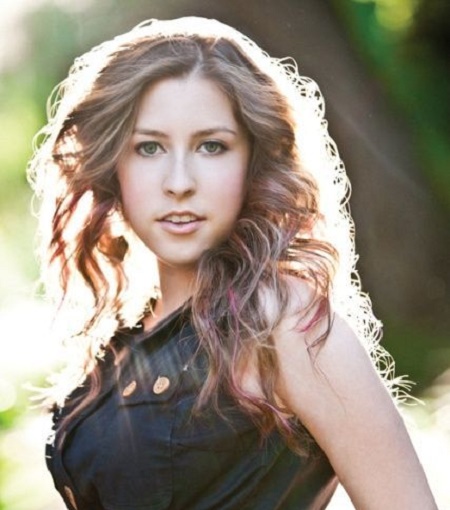 Eden Sher is an American actress best known for featuring as Sue Heck on the ABC comedy shows The Middle from 2009 until 2018. Moreover, she is also known to lend her voice to Star Butterfly's character on the Disney XD original animated series Star vs. the Powers of Evil.

She was born on December 26, 1991, in Los Angeles, California, United States. She was raised by her single mother who is a school teacher alongside her one older sister and one younger brother. She is an American citizen and is of mixed Ashkenazi Jewish ethnicity.

Yes, the talented and beautiful actress, Sher is one step closer to her wedding day. She is happily engaged to her long term boyfriend turned fiance, Nick Cron-Devico, who is a screenwriter.

The 27 years old star announced her engagement news to lover Nick through Instagram post-Tuesday on March 13, 2019. Throughout her four-year love journey, she posted the images of them saying: "It's been more than four years, we've been to four countries, lived in 2 houses, 2 dogs have been REAL BORED at 12 airports.

"Gotten fancy 100+ times, taken 58 photo booths, have collectively 1 Emmy, and now @nickcrondevico and I get to spend THE REST OF ETERNITY DOING MORE OF ALL OF IT. V EXCITING NEWS GUYS: WE ENGAGED AS FUUUUUUCK!!!!!!".

Not just Sher but Cron-Devico also shared the news on his Instagram wall. He said that a few nights ago he got engaged to the coolest person he knows.

Now, the lovebirds Eden and Nick can't wait to spend the rest of their lives growing up together. However, they haven't spoken to the media about their wedding plans until now.

Net Worth and Earnings of Eden Sher

Eden Sher has an impressive net worth of $2 Million as of early 2020. She has been active in the Hollywood industry for nearly two-decade. Thus, she credits most of her fortune to her successful acting professional career. Hong Chau and Tom Schwartz are TV stars with similar worth.

As for her salary, Sher reportdely earns $225,000 per episode for her appearances on ABC comedy series The Middle. Asides acting, she's earnings from various endorsement works for big brands like Fruity Pebbles, Walt Disney World, and Capital One Bank.

Eden began her acting work initially by participating in local theatre, school events, and singing competitions in her school at the age of 8. She made her first TV show appearance on Sons & Daughters as Carrie Fenton in 2006.

In addition, Sher has starred on many well-known TV shows including Weeds, The O.C., and Sons and Daughters. However, her breakthrough appearance in the ABC comedy series The Middle was a character of Sue Heck.

She made her theater film debut comedy-drama film Veronica Mars in 2014. Similarly, she made her TV series debut as Star Butterfly 's character in Star vs. the Forces of Evil in 2015 as a voice actress. She has also starred in movies such as Veronica Mars, The Outcasts as well as Step Sisters.

For her performance in The Middle, she owns Critics' Choice Television Award for Best Supporting Actress in 2013.