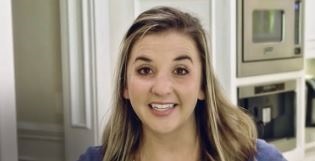 The personality hit today in our list is one of the popular celebrity's wives, Ellen Kershaw. She came to limelight after marrying MLB's Los Angeles Dodger's pitcher, Clayton Kershaw.

A little info has been placed on the internet regarding her private life. Well, scrolling throughout her day to day life, we found out Ellen was born on 9 November 1987 in Texas U.S. Maiden name as Ellen Melson, she attached Kershaw as her surname after marrying Clayton. Apart from her husband's shadow, she is a social activist.

Ellen Is Married To Her Long-Time Boyfriend

Ellen already found her love since her school days. At the age of 15, she started dating Clayton, and both were freshmen at that time. Both of them grew up together in Dallas where Clayton asked her out for the very first time. Later the pair attended the same school, and after graduating from college, the pair unwillingly took a different path.

Clayton even insists the separation helped them to grow their relationship stronger. At the age of 22, she was asked out by Clayton in a limo to have dinner together. After having dinner together, Clayton proposed her in his holiday-clad townhouse which answer was obviously yes without a doubt.

Mr. Kershaw and Mrs. Kershaw dated for more than seven years to finally take their relationship to the next level. After accepting the proposal, the pair got married on the 4th of December, 2010 which was a Dodger-themed wedding in Dallas.

The beautiful ceremony was attended by full of players and coaches alongside their respective wives as well as the newlyweds' couple's family and friends. It was held at Highland Park Presbyterian Church, and the wedding party was carried at nearby Royal Oaks Country Club.

The romantic couple is now married for more than nine years. Their wonderful relationship has to lead them to share two children. On January 23rd, 2015, the pair welcomed their first child, daughter Cali Ann Kershaw. Amazingly it was the day before Clayton was due in New York City to accept his third Cy Young Award. Later the pair welcomed their second child Charley Kershaw in 2017.

The family of four is now living a very happy and lavish lifestyle. Though the Los Angeles Dodgers pitcher's visits home for only 4 months in a year, Ellen has been one of the fundamental people to raise their children. However, the couple is still working hard day-day not only for financial support but also emotionally they are supporting each other and their beloved ones.

Net Worth of Ellen and her husband, Clayton Kershaw

Being wife of the famous sports personality, Ellen has an estimated net worth of $2 Million; however, it hasn't been officially confirmed yet. Additionally, her husband Clayton is one of the major players of the Los Angeles Dodgers who has a net worth of $60 Million. Nicholas Castellanos and Brandon Drury are some of Major League Baseball players with reasonable earnings.

Back in 2012, he signed a two-year deal worth of $19 Million, and later in 2013, he signed a seven-year $215 million contract extension. Later he bagged $35 Million which involved his salary and other endorsements. On November 2, 2018, he again hit by a new three-year $93 million extension with the Dodgers.

Currently, he is receiving $33 Million as his annual remuneration. Additionally, the family of four is currently residing in Studio City, California, the home which they previously bought for $4 Million.

Ellen and his husband are heavily involved with several charitable efforts that help them to form Hope's Home, an organization formed to build an orphanage in Zambia. Her husband, Clayton even pledged a donation of $100 per strikeout recorded in 2011 which lead him to donate $492,300 toward his $70,000 goal.

After winning the 2011 Players Choice Award, he donated $260,000 to Hope's Home. Furthermore, since 2013 season the pair have hosted Ping Pong 4 Purpose which is a charity ping-pong tournament at Dodger Stadium.