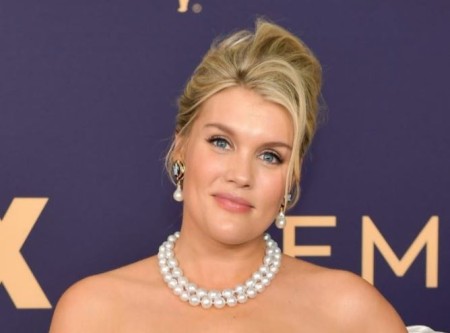 Emerald Fennell, is a prominent English actress, author, and screenwriter who made her directorial debut with the 2020 film, 'Promising Young Woman.' She earned wide praise as the showrunner of the second season of BBC America thriller series, Killing Eve. Also, Emerald is known for her portrayal of Camilla Shand in the 2019 web TV series, 'The Crown.'

The famous actress, Emerald, was born on October 1, 1985, in London, England, and studied English at Oxford University. She was born to the multi-millionaire parents, Theo Fennell, and Louise. Likewise, she belongs to white ethnicity and holds a British nationality. Her sister, Coco Fennell, is a fashion designer.

The beauty with brain actress Emerald is in a relationship with the love of her life named Chris Vernon, who works in advertising. The duo was seen together on Brunch with the Brits in Park City, Utah, back on January 21, 2018. On July 29, the two were expecting a child, and reportedly, she was seen pushing her newborn's stroller down the street in Los Angeles in November 2019.

Emerald loves to keep her personal life away from the limelight and has not shared much about her boyfriend and her baby. Also, she is not much active on social media.

There is no sign of them getting married until now. Fans and followers of Emerald are eagerly waiting for this big day. For now, the couple is going strong without separation rumors and controversies regarding their love life.

How Much Is The Net Worth Of Emerald Fennell?

As a established actress, she is earning well from her acting career. Similarly, she also boasts a six-digit salary from her screenwriting career. Fennell's net worth is around $1 Million as of 2020. As an actress, she has performed in over 10 + Tv series and 10+ movies up until now. Not to mention, she must have bagged half of her fortune from playing films and series.

The average yearly income of an actress is around $92,000. However, being a well-known and experienced actress, she might be earning over $100,000. Furthermore, she is also a talented screenwriter and wrote some of the critically acclaimed movies and series, such as Promising Young Woman and Killing Eve.

The average salary of a writer is $100,000 per year. But, being a high budget film and series writer, she must be enjoying a salary of over $150,000 per year. Besides, she is an author and earns a decent amount of money from the sale volume of her books.

Fennell is known as the show-runner for the 2nd season of BBC America thriller series, Killing Eve. For her outstanding work on this series, she won two Primetime Emmy Award nominations. Phoebe Waller-Bridge wrote its first season. Not only she had a successful career in screenwriting but also in acting.

She is recognized for her portrayal of Camilla Shand in the 2018 Netflix Tv series, The Crown. She starred alongside some of the well known and A-listed celebrities such as Tobias Menzies, Helena Bonham Carter, and Claire Foy.

Stay Tuned With Us: MarriedCeleb To Know More About Actresses