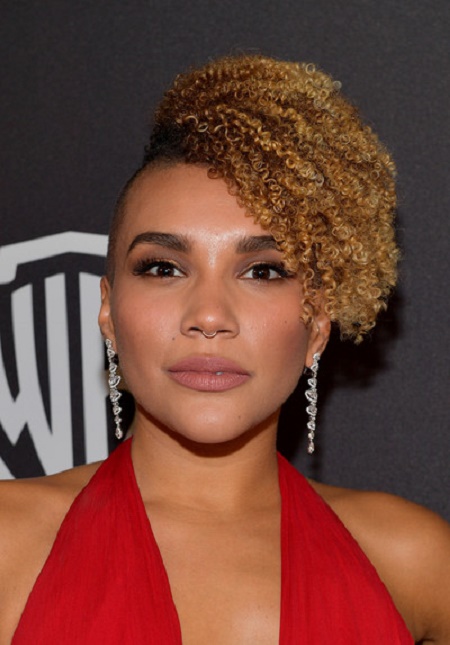 Emmy Raver-Lampman, an American actress, is quickly becoming one of our favorite actresses. After inspiring audiences with her role as Allison Hargreeves in Netflix, 'The Umbrella Academy she's placed herself as one to watch. In addition, she is also known for A Million Little Things (2018) and Hamilton (2020).

The TV star was born on September 5th, 1990 in Norfolk, Virginia in the US. Her father, Greg is a writer and teacher while a mother Sharon is a professor at Old Dominion University. For her schooling, she studied at the Governor's School for the Arts, Maury High in Norfolk. Later, she graduated from Marymount Manhattan College with a BA in Theater in 2012.

Who is Emmy Raver-Lampman dating?

Her boyfriend is none other than, Grammy Award and Tonny Award Winner, Daveed Diggs. He is an American actor, rapper, musician who is better known for the characters of Thomas Jefferson and Marquis de Lafayette in musical Hamilton.

These beautiful lover, Emmy, and Daveed are reportedly dating since 2018 and is still going stronger than ever. Likewise, the two first actually met eachother on the set of the original Broadway production of Hamilton in 2015.

At that time, Daveed Daniele Diggs was dating another lady whose name is Jalene Goodwin. Raver-Lampman, 31, and Diggs, 38, finally fell in love and began dating privately after understanding each other for a year.

But till 2018, the pair had kept their love life secret or away from the media. They started sharing pictures of one another on their respective social media in 2018. Emmy shared a photo of them along with two friends, named Morgan Marcell and Voltaire, on MAY 21, 2018.

And in February 2019, the 5 feet 6 inches tall actress and her partner, Daveed made their relationship public by attending the 2019 Film Independent Spirit Awards in Santa Monica, Calif next to Janina Gavankar. And indeed the two have been together for almost three years.

Who plays Allison in Netflix, The Umbrella Academy?

Well, the Umbrella Academy is an American superhero web TV series, produced by Steve Blackman. And the Netflix series released in February 2019 where Emmy portrays Allison Hargreeves known as the Three-Number and The Rumor.

But, as a teenager and as a 4-year-old, Eden Cupid and Jordana Blake play Allison respectively. She was previously a regular in musical theatre and performed in several Broadway and national touring shows, including Hair, Jekyll & Hyde, Wicked, and Hamilton.

Working in several TV series, Emmy earns an impressive amount of money. As of May 2020, she has an estimated net worth of around $300 thousand. She garnered this fortune through her career as a professional actor.

The average salary of an American actress is $56,980 per annum, according to some sources. But, looking at her career path, Raver-Lampman receives around $40,000 a year from working in television shows. Hence she now lives a comfortable life with her family.