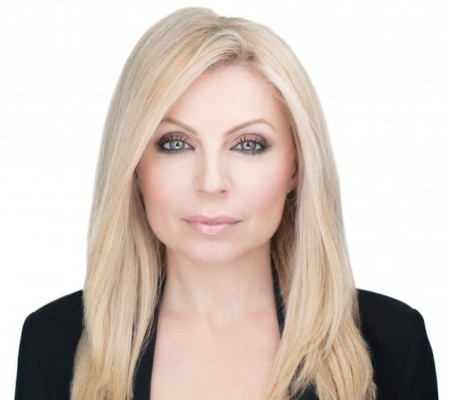 Evy Poumpouras is an American television host and security analyst, best known for co-hosting the reality show, Spy Games on Bravo TV. She is also known for her appearance in the news talk show, Fox and Friends. Recently, she starred as a guest in the talk show, Today with Stefan Holt in 2019.

Poumpouras has won the hearts of millions with her beautiful personality and sizzling figure. But has she found anyone who is successful in winning her hearts? Let's take a glimpse of Poumpouras' personal life.

Evy Poumpouras is married to her mysterious spouse. She prefers to keep her husband's details private. Back on 12th May 2017, the star shared a throwback picture of her wedding.

For the day, the bride went for a white strapless gown. Meanwhile, the groom wore a black suit which he teamed up with a blue tie and black shoes.

Henceforth, they're living a happy married life but yet to share children. Currently, the soulmates reside in New York City, New York.

Evy Poumpouras and her hubby are living an adventurous life since the day of their marriage. They prefer to visit several exotic places.

On 20th February 2017, she posted a picture via Instagram while hitting the waves with her favorite surfing partner as her husband in Los Angeles beach.

The blonde professor also took her breath-taking moment while skydiving at Navy Seal in San Diego on 30th July 2016. She is also seen enjoying her vacation at Badlands National Park with her spouse on 31st July 2018.

Evy Poumpouras Net Worth And Salary

Evy Poumpouras has the net worth of around $700 Thousand to $1 million. She makes an impressive amount from her career as a host and speaker.

The speaker is serving as Co-host of Spy Games in Bravo TV and a professional speaker in Chartwell Speakers since 2018. Moreover, a host of NBC makes an average salary of around $34,669 to $57,015.

The star, in addition, is also working in the City University of New York as a professor. From her profession, she earns an annual average paycheck of $106,778.

Poumpouras makes good bucks from her endorsement deals. In one of her Instagram post, Evy promoted the original and best selling OC pepper spray company's brand, Mace Brand, in 2018.

Evy is also seen promoting many other brands like Hanes, ALIX NYC, NET-A-PORTER, Nike Women, and BOMBSHELL SPORTSWEAR. Undoubtedly, she received a hefty sum of paychecks from the deals.

Poumpouras started her career as a special agent for the United States Secret Service in 2000. After working for 13 years, she became an adjunct professor at the City University of New York in 2013. She is also working as a professional speaker for Chartwell Speakers since 2018.

The NBC host made her debut appearance as a panelist in the American news talk-show, Fox and Friends in 2014. Later, she appeared as a special guest in the comedy talk show, Join or Die with Craig Ferguson in 2016.

The beauty also starred in the reality television series, Hunted in 2017. Further, she featured as an interview specialist in the television crime series, The Disappearance of Maura Murray. Similarly, her other television works are CNN Newsroom, The Lead with Jake Tapper, etc.

Poumpouras graduated with Bachelors in Political Science and Government in the Hofstra University. Upon graduation, she enrolled at Argosy University, where she earned an M.A. in Forensic Psychology degree.

Recently, she received an M.S. in Journalism degree from Columbia University in 2018.