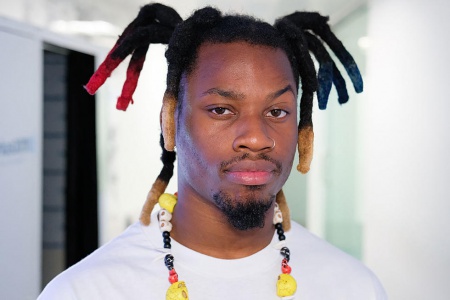 In the world where Hip-Hop artists like Lil Wayne, Desiree Montoya, and Rae Sremmurd, to name a few are taking the music industry by storm, Denzel Curry is making his mark as an indie hip-hop artist in Miami, Florida. As his music scene is growing each day, millions of fans want to know more about his personal life.

Did you know? The American rapper went through a depression because of his girlfriend. To know more on his serious issue, tag along as we try to explore more into his relationship status.

His Ex Gave Him a Depression

The American rapper who is producing music and songs since 2010 was in a year-long relationship. Denzel, however, has not disclosed the name of the woman, but as per many online sources, the artist broke-up with her after a year of dating.

The real reason of his split from his lover is not mentioned anywhere, but as the story goes, the couple had a big fight, which ended in them splitting from each other. According to his close sources, the rapper went through a depression period shortly after the break-up.

The 24-year-old is perfect as of now and is again starting to produce music.

After the dramatic break-up and going through depression, the rapper is wholly focused on his career as a hip-hop artist. The creative artist is currently single and enjoying his work of passion.

Besides his romantic life, he was a very good friend with XXXTentacion. In an interview, he talked about how he and Tentacion were close friends and be part of each other's musical inspiration.

Not just that, he is also a very good friend with emerging young music artists Billie Eilish. He and Billie even performed together in a When we all fall asleep tour. Eilish went against her label to play with Curry and also called him her favorite rapper.

During his time at an Elementary school, Denzel started writing poetry. It was in sixth grade he found out about his skills in translating poems into rap when he performed in the Boys & Girls Club.

Curry and his friend Premi, did a rap battle every day to sharpen their skills in the art. After some good years of practicing and writing good songs, Denzel joined the group Raider Klan and even released his first mixtape.

After he made up his mind on what he wanted to do, Curry started producing mixtapes instead of going to college. At the moment, he is followed by 1.2 million followers on his Instagram and listened by millions around the world.

After his third mixtape, many critics and artists labeled him as the prospect who can be the greatest of all time. Many experts even say he is very similar to the legends like Tupac Shakur, Eminem, Drake, and Biggie, to name a few.