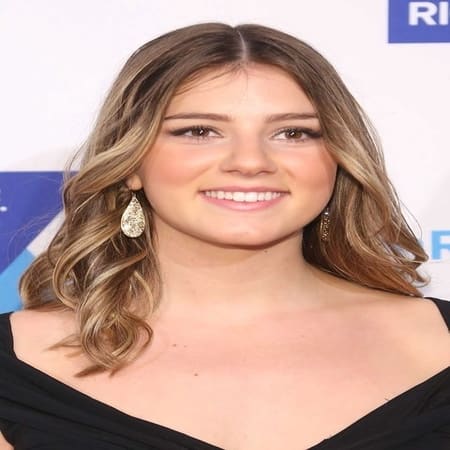 Michaela Cuomo is an American Celebrity kid who is known as the youngest daughter of New York Governor Andrew Cuomo and his divorced partner, Kerry Kennedy. Her dad is an American politician while her mom is the president of Robert F. Kennedy Human Rights.

Michaela's parents were married for about 13 years from 1990 to 2005. She was born on August 26, 1997, as Michaela Kennedy Cuomo in the United States.  Further, she has two older twins sisters named Mariah Kennedy Cuomo and Cara Kennedy-Cuomo, born on January 11, 1995, now 25 years.

The politician Andrew's youngest daughter, Michaela is now enjoying her love life fullest with her boyfriend. Besides loving her family, she also loves a man whose name is Alex as per Instagram post,

It seems, the pair has been together since 2017 and is still running higher. Scrolling her Instagram, she caught a look with her long time boyfriend at different hanging out places. They had their dinner together on July 14, 2017, at Malibu, California, and Cuomo reported in her post " the Best trip kick-off".

Similarly, her relationship with her father, Andrew, 62, is very good and powerful. She and her sisters have also found that they support their governor's dad in various campaigns and events. Recently, she gave his dad much needed support when he was at the forefront in trying to control the spread of Coronavirus, COVID-19, in his nation.

Michaela Kennedy currently resides in Westchester, New York, with her mum, Kerry, and two sisters Cara, and Mariah. However, the entire family in the midst of Covid-19 happily hang out in the same house in New York.

She is a Student of Brown University

23, Michaela just completed her final years at the Brown University Private Ivy League college in Rhode Island shortly before the pandemic. Her subject was education and human development, with an emphasis on social equality.

While attending the college, she wrote as a cultural writer for the Brown Political Review and also operated as a peer-educator on sexual harassment. She has also launched CUSP, a group working to prevent on-campus sexual harassment.

On the other hand, her big sister Mariah Cuomo also attended Brown University but Cara received her degree from Harvard.

She is an Equality Advocate, Justice and Political Activism

Just like her parents, Michaela Cuomo's been roaming around the world battling for social justice. At college, Brown, she became one of the big leaders for the It's On Us movement in 2014 and has been active for five years. The campaign was initiated and led by Vice President Joe Biden, 77, at the White House Under the Obama administration.

It's on Us encourages college sexual assault to speak out, while empowering victims of sexual assault. She also shared a picture of the campaign with the meeting founder, Joe, and is frequently posted about it on Instagram. She is also close to the 44th U.S. President, Barack Obama, 58.

So far, Michaela is associated with Teneo, the multinational CEO consulting company. And it provides strategic advice across their wide range of core goals and concerns whose clients include Fortune 100 and FTSE 100 as well as other multinational corporations. She is also an associate on the nonprofit Robert F. Kennedy Human Rights, headed by her mother Kerry, 60.