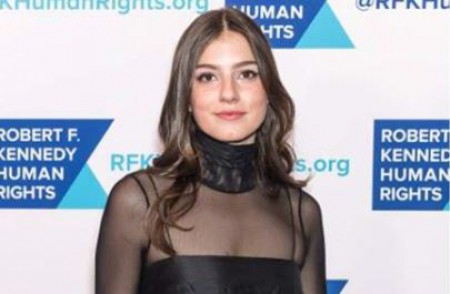 The 22-year-old, Michaela Cuomo is the youngest child of a politician, Andrew Cuomo, and his ex-wife, Kerry Kennedy, a human rights activist and the president of Robert F. Kennedy Human Rights.

Michaela is a social activist with a history of working in the civic organization industry. Also, she is skilled in Mindfulness-based Psychotherapy and Human Rights.

She is currently working as the founder of It's On Us: Brown University. Also, Michaela has traveled and campaigned for Congressman Joe Kennedy, President Obama. Likewise, she also works as a public speaker for Robert F.kennedy Human Rights.

Who is Michaela Cuomo's Boyfriend?

The beautiful social activist, Michaela, is currently in a relationship with her boyfriend, Stefan Jacobson. The young couple is neither married nor engaged. Stefan and Michaela's romance became public after she shared a picture of them on her Instagram on July 18, 2018.

Michaela has been in a relationship for over a year now as of 2019. Her boyfriend, Stef, is a handsome young man. Together, the pair visits exotic sand beaches, attends parties just like typical partners.

Talking about Cuomo's previous affair, she was dating a guy named Alex back in 2017. They dated for a few months before separating around November 2017.

Michaela and Alex still have their old photographs unremoved from their Instagram. It appears they decided to broke up with a mutual understanding.

Michaela's divorced parents, Kerry and Andrew married each other on June 9, 1990, in the Cathedral of St. Matthew in Washington, DC. Aside from Michaela, they have two daughters: twins, Cara Ethel Kennedy, and Mariah Matilda Kennedy.

The young Michaela is already in the mission in keeping up his mother's legacy in women empowerment. She advocates against rape, sexual abuse, and homophobia. After graduating from Brown University, she will soon join her mother Kerry's cause at the Robert Kennedy Center for Justice and Human Rights.

The Staff writer of Brown Political Review, Michaela Cuomo has a net worth of $500,000, as of 2019. She has experience in the social activity of working in the civic organization industry.

As a staff writer for Brown Political Review and the campus president of Brown University. Also, her parents, Andrew and Kerry are one of the wealthiest politicians. Kerry has a net worth of $10 million. Human right activist such as Danielle Moodie-Mills is also a pioneer woman in the field of

while the precise net worth of Andrew is unavailable.

As Michaela is focusing on her upcoming graduation in 2020, she will be less active in political campaigns. Back in 2015, she sold T-shirts raising social awareness about sexual abuse.

Michaela has the privilege of being the daughter of famous political figures. At a young age, she lives a lavish lifestyle. Also, with the growth of her career, Cuomo will earn a higher income.

Do visit Marriedceleb to get all the celebrity-related articles!!!