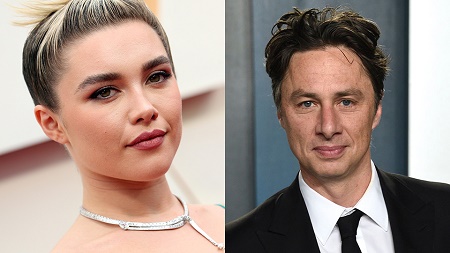 Little Women star Florence Pugh, 24, is reportdely dating, Zach Braff, 45, since 2019. However, because of their 21-year age difference between them, the pair have been criticizing and receiving online threats from internet trolls and haters, which they are ignoring.

On Monday, April 6, the actress Pugh posted a picture in celebration of Braff's birthday and she wrote a birthday message. She captioned the following post:

Today we shall smile wider than the clouds are grey.
April 6th and we’re celebrating hard!
Happy Birthday wishes, boogies and cheers for this special person.
Raise those bubbles and jiggle!

Oscar nominee, Florence also explained why she has chosen to turn off her beautiful comment on her latest birthday message. She said it is the first time she has had to turn off the comments on her page in her entire Instagram life.

She continues saying that she had never been an Instagram account that likes that toxic vibe." More interestingly, despite receiving a deluge of negative comments on Zach's birthday message, she recently received support from singer Ariana Grande.

The "7 Rings" singer shared the Pugh's video via a screenshot on her Instagram story, writing, “Beautifully worded and deeply appreciated. Sharing special, personal life things that make u happy on the internet can be truly traumatic".

Despite the numerous online trolls and fans' hurtful messages, the Black Widow star is still continuously defending her friendship with director Braff. "I'm an actor because I like to act and I don't mind people watching my stuff, but people have no right to teach me about my private life," she told Elle Magazine in an interview.

Pugh and Braff who kept their relationship low-key knew eachother in August 2018 as per People. By August 2019, the couple was pictured for the first time on holiday in Spain. Actually, the actress Sydney Morton posted a photo of them and her friends or maybe boyfriend on Instagram.

After that, the two worked together for Braff's short film In the Time It Takes To Get There in April 2019. She played a Victorian "influencer" with Alicia Silverstone in the picture. Simultaneously, they were also pictured in New York City holding each other's hands and their relationship was confirmed.

Florence and Braff currently make rare appearances on social media accounts of each other. Additionally, this low key couple also shares mutual friends and often seen hanging out with family.