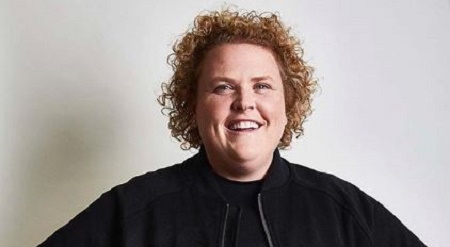 Comedian, writer, and actress, Fortune Feimster, credited for her role in The Mindy Project (2015-2017). After making her television debut on NBC's Last Comic Standing in 2010, she now hosts Sirius XM show What A Joke with Papa and Fortune with Tom Papa since July 2019.

Emily Fortune Feimster was born in North Carolina, United States, on 1 July 1980. In addition to her parents, Ginger and Mike Feimster, she grew up together with two older brothers, Price and Jay. She is American by citizenship and is of white origin.

39, Fortune Feimster who came out as a lesbian at the age of 25 in 2005 is officially off the market now. Since 2016, she is in a romantic love relationship with her lesbian girlfriend named Jacquelyn Smith, an podcaster.

The Mindy Project star revealed the news of engagement with her longtime girlfriend, Jacquelyn, via Instagram and Twitter Friday. She shared three embracing and kissing photos on January 6, 2018, with her fiance, showing off her diamond ring.

Likewise, they had celebrated their engagement in Big Sur, California. She captioned the post:  “After two and a half years with my beautiful lady, she’s officially my feyoncé,”

The Couple Showing Love for Each Other

Also, the host of Last Comic Standing and her fiance post their intimate pictures with beautiful captions on social media. Her Fiance Smith recently posted a swimming image of them stating on February 24, 2020: Two different versions of the lesbian swimsuit.

The pair, are now traveling, relaxing and spent some quality time together with their two dogs, including Maddy, in Big Sur, California. In fact, they own their own home in Belmont, North Carolina.

How Much Net Worth Does Fortune Feimster Have?

Fortune Feimster is an American comedian, writer, and actress who has an estimated net worth of $1.5 million as of early 2020. Her most of incomes and earnings come mainly from hosting shows and providing appearances on many TV shows and Netflix series.

Netflix Is A Joke- Fortune Feimster

Feimster currently hosting her own podcast, Sincerely Fortune and appearing on Netflix Comedy show, Netflix is a Joke. In addition to this, she served as Round Table Co-host for Chelsea Lately between 2013 and 2014, starring Kurt Braunohler.

Likewise, Chelsea Handler who anchored the late-night comedy talk show Chelsea Lately on E! reportedly made $8 million. So, as a well-known comedian and host, Feimster could earn more than $100,000 in salaries a year.

Feimster moved from Spain to Los Angeles in 2003 to become a personal assistant to pursue comedy at Procter and. She then started a career in entertainment journalism that lasted seven years. She entered The Groundlings Theater in 2005, where she practiced improv and sketch comedy.

After four years, Feimster was chosen to join the Sunday Company at Groundlings. She has also featured on several podcast shows, such as Anna Faris is Unqualified, Sweet & Salty, Lovett or Leave It, Query and This Past Weekend.

Further, Fortune has performed in many American late-night TV shows like Chelsea, Champions, The L Word: Generation Q and Friendsgiving, among others.