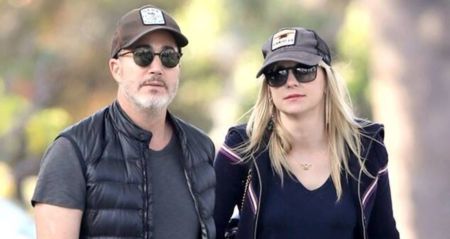 Screen Actors Guild-nominated actress, Anna Faris is composing her single soul inhabiting with her fiance, Michael Barrett. The couple is currently enjoying the best part of their relationship after getting engaged. So, will the perfect soulmates walk down the aisle in 2020?

The leading star of Scary Movie sequels, Faris have both success and achievement in her professional life. But, does she succeed in making a good relationship in her intimate life? Let's find more interesting things going in Faris's personal life.

Coming up to the couple's first meeting, Anna and Michael met for the first time on the set of Overboard in 2017. While making their love chemistry on the big screens, the duo also made a strong connection in their real life.

After finishing the shooting of Overboard, the two started dating secretly and remained close on the media about their relationship. Nevertheless, they came out as a real dating couple in September 2017 after dating quietly for several months.

One day, Anna's mother in reel life came to her room and found her wearing an expensive engagement ring, and then she said, "What is that ring on your finger?" Faris then told that she was waiting for everyone to notice about her engagement with Barrett, which was done in November 2019.

During an interview with Anna, she proclaimed that "she believes in love and monogamy, in which the commitment with a relationship is a legal system." As of now, she and her fiance, Barrett are planning their future wedding ceremony.

The blonde hair actress, Farris was first married to an actor, Ben Indra, whom she first met on the set of 1999 film, Lovers Lane. They tied the knot in a small and private ceremony held on 3rd June 2004.

The lovebirds stayed married for an overall of four years, but they, unfortunately, separated, citing irreconcilable differences and filed for divorce in April 2007. They later finalized their divorce on 19th February 2008, where Faris paid $900,000 to Indra in the exchange of some properties and acting royalties.

Her History with Chris Pratt

Following her divorce, Faris started dating her Take Me Home Tonight star, Chris Pratt in 2008 and became engaged by the end of 2008. The pair then united as husband and wife on 9th July 2009 in Bali, Indonesia.

The married partners' relationship was going smoothly for approximately a decade, but after some turn of events, they filed for divorce on 1st December 2017. They, further, concluded their divorce on 16th October 2018 and took half-half custody of their son, Jake Pratt (born in August 2012).

After Anna's second tragic divorce, she is now raising her child, Jake with her fiance, Barrett. Similar to the couple's parenthood, Tammy Bradshaw is also taking care of Terry Bradshaw's biological children.