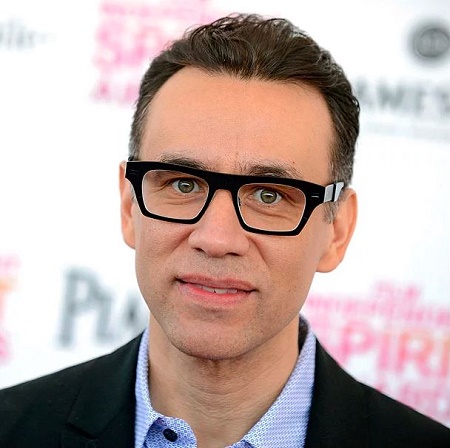 Fred Armisen, an American comedian, actor, singer, and writer, is best known for his role as a cast member of the comedy sketch show Saturday Night Live (SNL) from 2002 until 2013. Currently, he works as the bandleader of Late Night with Seth Meyers house band, The 8G Band. He is also the founder of the website named ThunderAnt.com, that features comedy sketches.

Fereydun Robert Armisen was born on December 4, 1966, in Hattiesburg, Mississippi, the United States to the parents, Hildegard Mirabal and Fereydun Armisen. He holds American citizenship and is of mixed ethnicity. For his schooling, he studied the School of Visual Arts in Manhattan but dropped out to start a career as a rock drummer.

Since the two divorces, the 53 years old actor Armisen started a new relationship with American actress and television director, Natasha Lyonne. She is widely famous for portraying the character of Nicky Nichols in the Netflix series Orange Is the New Black (2013–2019). To date, she has starred in over 50 hits movies.

This comedic power who met through mutual friend Maya Rudolph started dating each other in the year 2014. Initially, on 23 August 2014, they participated together in the Variety and Women Film Emmy Nominee Celebration. And the two were very flirty at the programs, and they even talked very closely, the sources claimed.

Later, Fred and Lyonne were also seen together at the afterparties of the Emmy Awards. Where the two actors were reportedly "chuckling" with their "linked arms." Since the year, the pair have flaunted their love in a very romantic way by sharing eachother pictures in their respective social media accounts.

Recently, Armisen posted Natasha's single photo on the occasion of her Birthday with heart emoji on April 5, 2019. He wrote: Happy Birthday @nlyonne !!! 🍰❤️🎂🎉". Not only this, but they also collaborated on-screen: they both appeared on Big Mouth. And Natasha, 41, even guested on his show Portlandia several times.

As of now, the power couple has been enjoying their love life for over six years but yet to get married.

He is a Twice Married Man

Yes, before being in a relationship with Lyonne, he was married two times. His first marriage was with English singer and songwriter Sally Timms, now 60 years. The divorced couple was together for six years from 1998 to 2004.

However, they filed for divorce in September 2010 after 2 years of marriage where they listed their date of separation as June 2010. And they finalized their divorce on 13 May 2011. After divorcing from Elisabeth, he had a love affair with SNL cast member Abby Elliott.

How Rich is Fred Armisen?

Working in the entertainment industry since 1984, Fred Armisen is known as one of the multi-talented Hollywood star all the time. As of may 2020, he has an impressive net worth of $8 million. He has accumulated his worth throughout his multiple works as an actor, comedian, writer, producer, and musician.

During his acting career, the 1.75 m tall Armisen has appeared in many hits films like EuroTrip, Anchorman and Cop Out, etc. His starred comedy film Anchorman: The Legend of Ron Burgundy earned $90.6 million worldwide. His popular movie Kiss Me Again, he shared the screen with fellow SNL alums Tina Fey, Amy Poehler, and Emma Stone.

Armisen is co-creator and co-star of Portlandia, the IFC sketch comedy series with his comedy partner Carrie Brownstein. For his work on Portlandia, he was nominated for the Emmy Award for Outstanding in 2012, 2013 and 2014 and for Outstanding Supporting Actor in a Comedy Series.

Stay Connected With MarriedCeleb And Find Out More Updates