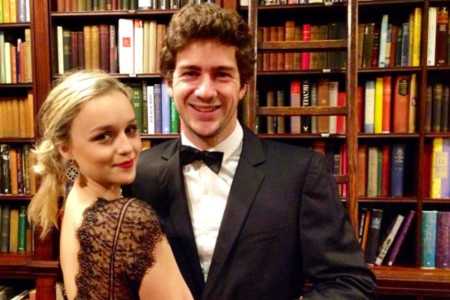 When you do the hard work for something great, all the things make you feel accomplished, and the achievements come into your doorsteps. The following phrase is for Georgina Beedle, who grabbed the attention with her debut role, Mykaela Pierce in the action-adventure drama series, Apocalypse Pompeii.

The rising actress, Georgina has won the hearts of millions with the arts of acting and portrayals that influenced her fans. So, does anyone stole the heart of Beedle? If you love to know more about Beedle's personal life, then read the article to the end.

American actress, Georgina is romantically involved in a long term relationship with her boyfriend, David. The couple met for the first time in 2014 and shortly began their dating after having a lovely time together.

On 20th June 2014, Beedle shared a picture of David for the first time via Instagram. In the post, he was seen putting hands on his left side of the chest during the national anthem in the world cup match between France and Nigeria.

On the other side, Georgina and her partner, David are fond of going to new places and taking pictures for memories. Georgine shared a photo on Instagram while standing alongside David in Chateau Bayard on 3rd July 2016.

Does Georgina exchange the wedding vows with David? It seems like the longtime couple isn't planning for uniting as husband and wife. But, in the future, they will surely make a plan for their livelihood. Similar to Georgina and David, some other dating-couples like Rosario Dawson and Cory Booker are going to make a commitment for a whole life.

Previously, the pair were seen in a wedding dress, where Georgina wore in a black one-piece dress, and David was in a slim-fit black suit, tied up with a red tie. But it was proclaimed that the couple wasn't the actual bridegroom after they said they were attending in their close friends, Julie and Louis's wedding on 31st August 2014.

As a prominent actress, Beedle got the opportunity to portray the character of Princess Natalia in the historical biographical drama series, Catherine the Great since 2019. The television series is about the story of the greatest Czania, Catherine the Great, and the Hermitage.

Beedle is seen starring with other popular TV actors, including Helen Mirren, Jason Clarke, and Gina McKee, among others in the historical series. Other than that, the show garnered two awards nominations for Satellite Award as well as Golden Globe Award in 2020. Just like Beedle, some other actors like Alexander Bauer is also mesmerizing with his notable roles.