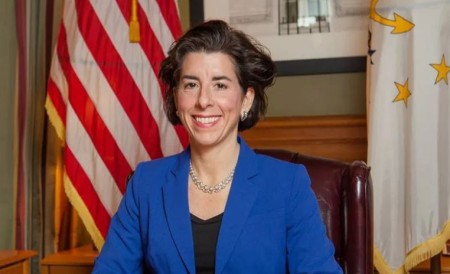 Gina Marie Raimondo was born on May 17, 1971, in Smithfield, Rhode Island, U.S. She is 49 years old as of 2020. Also, a venture capitalist, Gina is one of the nine current female governors of the United States.

Further, Raimondo, as a Rhodes Scholar, attended New College, Oxford. She received a Master of Arts and Doctor of Philosophy in Sociology. Additionally, Gina has a Juris Doctor degree, which she earned from Yale Law School in 1998.

Gina has been longtime married to her husband, Andrew Kind Moffit. The couple first met while studying at Oxford University in England. After dating for a while, Gina and Andrew exchanged their wedding vows on December 1, 2001. Their marriage ceremony took place at the Roman Catholic Cathedral in Rhode Island.

During the time of the marriage, the couple worked in New York. Gina was a senior vice president for fund developments at a company called Village Ventures in New York. Likewise, Moffit worked as an associate for a management consulting firm, McKinsey & Company, in New York. They have been married for nearly 19 years as of 2020.

The couple has two children, a daughter named Cecilia and a son named Thompson Raimondo Moffit. Currently, the family of four resides on the east side of Providence. Like Gina, Nikki Haley is the first female governor of South Carolina.

There is no exact information on Raimondo's fortune and net worth. Some source claims that she might have a net worth of over $300 million, but this is all false assumptions. While Gina sure has a massive income, her net worth might not be less than $5 million. As a governor, her annual salary is over $125,000. Additionally, she receives extra remuneration of $100,000, including bonuses and personal expenses.

Before becoming a politician, Raimondo worked at venture firms. Her wealth, in part, comes from the State of Rhode Island's investment in Point Judith Capital as she is a shareholder. As of now, Raimondo is a venture capitalist. Therefore, she doesn't have to worry about her bank balance.

Moreover, Gina is the co-founder of a small private investment firm called Point Judith Capital. In 2019, she reportedly made over $800,000 on her firm's payouts. The 40th California governor, Gavin Newsom, also has a decent net worth.

The first woman governor of Rhode Island has been recognized for her visionary ideas and its implementations. In 2016, Fortune named her as one of the World's 50 Greatest leaders. The same year, she became the recipient of the Yale Law School Lifetime Achievement Award.

Apart from politics, Gina is active in social works as well. She serves as the vice-chair of the board of directors of Crossroads Rhode Island. She is the former trustee at Women and Infants Hospital and Chair of its Quality Committee.