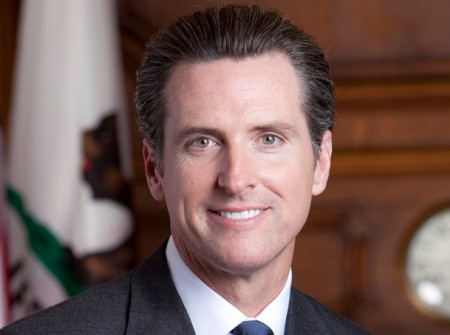 There are few politicians who have made a profound impact on society. Take, Gavin Newsom for example; he brought several state laws to create sustaining policies. The 51-year-old, Newsom has been rising to the highest levels of California politics for the last two decades.

From his diversified career, the former 49th lieutenant governor of California has managed to earn millions of earnings. He is currently married to a filmmaker and is the 42nd mayor of San Francisco from 2004 to 2011.

The renowned businessman/politician, Gavin Newsom, is married to a documentary filmmaker and actress, Jennifer Siebel Newsom. The couple first met on a blind date set up by a mutual friend at the Yerba Buena Center for the Arts on October 2006.

The pair announced their engagement in January 2008. After two years of engagement, they exchanged their wedding vows in Stevensville, Montana on July 27, 2008.

Gavin and Jennifer's marital bond is over eleven years, but before Jen, Newsom was previously married to a prosecutor. Just for the information, former California governor, Arnold Schwarzenegger, and his ex-wife, Maria Shriver also had a blissful marriage.

On July 3, 2013, their second daughter and third child, Brooklynn was born. The Newsoms' newfound joy came when they announced the birth of the fourth child, a son named Dutch William on February 26, 2016. The family of six members currently reside in California.

In December 2001, Gavin, then a San Francisco city supervisor married his first wife, Kimberly Guilfoyle. Their wedding ceremony was held at Saint Ignatius Catholic Church on the campus of the University of San Francisco.

Talking about Guilfoyle, she is a former San Francisco prosecutor and legal commentator for Court TV, CNN, and MSNBC. The lovely television news personality previously co-hosted The Five on Fox News.

Everything was going perfectly well until Gavin and Kimberly jointly filed for divorce citing the strain of a bi-coastal marriage in January 2005. However, there are some speculations on whether she had known about Newsom's affair with his secretary.

In January 2007, when Newsom was dating his second wife, Jennifer, a scandal nearly destroyed his public image. Many sources published the news of Newsom and his affair with Ruby Rippey-Tourk who worked as Newsom's appointments secretary.

When Gavin and Ruby were dating, she was still married to then-husband, Alex Tourk. And guessed what? Alex at that time, was Newsom's deputy chief of staff and was a close friend.

After Ruby confessed her relationship with Newsom, Alex immediately filed for divorce and left Newsom's campaign and administration.

When asked about the betrayal to his close friend, Gavin said:

"I’ve hurt someone I care deeply about, Alex Tourk,” the mayor added. “And that is something I have to live with.”

When asked to Ruby, she said the intimate relation with Newsom was a part of rehabilitation for his substance-abuse problem.

Gavin dated a socialite Kelley Phleger from 1992 to October 1997. After five years of dating, the couple separated from each other. Afterward, Kelley married popular actor, Don Johnson in 1999.

The current California governor, Gavin Newsom is a multimillionaire businessman. Sources report that he enjoys a net worth of whopping $14 million. Besides politics career, Newsom has an upscale chain of wine stores, wineries, restaurants, nightclubs, hotels, and retail shops.

His business ventures extend from the Bay Area and Napa Valley to Lake Tahoe and Palm Springs. Gavin made his fortune by starting with a single wine store on Fillmore Street in San Francisco which opened in 1992.

As per some sources, he built some of those businesses with the Gettys, heirs to an oil fortune who have deep connections to the Democratic lieutenant governor's family.

Besides having a fruitful political career, Newsom found his success as an entrepreneur and jobs creator, citing the 23 businesses and 800 employees under the umbrella of his Plumpjack Group.

How Gavin managed to convince a billionaire to invest in his company? His father William Alfred Newsom III was a state appeals court justice and attorney for Getty Oil. Therefore, he had good relations with the Gettys. When Newsom founded his first venture, Plump Jack, he convinced Gordon Getty, a family friend, to invest.

When asked about the relationship with Gordon, he revealed in an interview that he treated Newsom like a son and invested in his first business venture because of that relationship. Dr. Raj Kanodia, a renown plastic surgeon, also has a close relation with Romanian-American billionaire businesswoman, Anastasia Soare.

Newsom's Airelle Wines and a related entity, Villa Encinal each had a fair market value of $10,000 to $100,000. Also, his wife holds a blind trust with investments worth more than $1 million.

A disclosure for 2017 reflected more than $6 million in investments and assets, with an additional $10 million.

More than $900,000 of the couple's $1.29 million income came from business in which Newsom and his wife hold an ownership stake. The couple earned $787,751 the most outside of their salaries from their stake in Airelle Wines, which runs Napa Wineries.

Criticisms about his Net Worth

How he amassed, his fortune has been sharply criticized by his opponents. Democrat and Republicans colleagues criticize him for making millions in the wine industry while serving as lieutenant governor. Also, he is cited as the poster boy for the privilege and the beneficiary of a famously moneyed oil family.

Currently, Gavin, his wife, and their four young children reside in a $3.7 million, six-bedroom house in Fair Oaks. The couple had bought the property in December 2018.

In June 2009, Gavin and Jennifer purchased their house in the Ashbury Heights neighborhood for $2.738 million but later sold it.

You may like Marriedceleb for more interesting Gossips and Biographies!!!