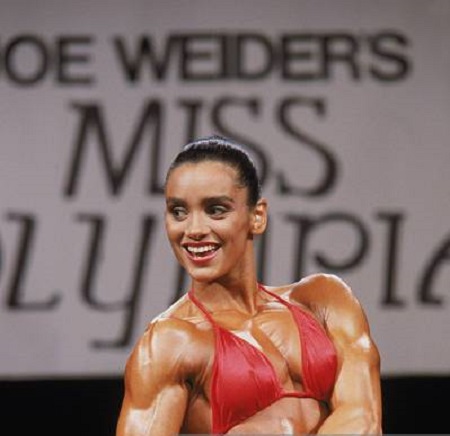 Gladys Portugues is an American former professional bodybuilder, TV and film actress, and author. She is widely known for placing two times in the top 10 in the Ms Olympia contest as a bodybuilder.

In addition to that, she has made appearances in films such as The Morning After (1986), The Wil Shriner Show (1987), and It's Alive III: Island of the Alive (1987). Let's grab more data about her personal life in the following sections.

They first met in Mexico during the photoshoot in the 1990s. Then the lovebirds tied the wedding knot on 3 January 1987 in a private ceremony. They were together until Portugues found Jean cheating on her with actress Darcy LaPier, whom he married in February 1994.

So after being together for five years, they officially had divorced for the first time in 1999. Afterwards, the Muscles from Brussels actor weds his fourth wife Darcy whom she shares one son Nicholas Van Varenberg, born on 10 October 1995.

Both of them separated after a year when Darcy found Claude cheating on her with his co-star, Kylie Minogue. Before that, he was married to Cynthia Derderian (m. 1985–1986) and Maria Rodriguez (m. 1980–1984).

Gladys and Jean Remarried in 1999

Growing deeper in love, the couple exchanged the vows once again on 25 June 1999 after five years of divorce. Since then, they have been living a happy life together until 2015.

Standing by each other's side for 15 years, their relationship again started having troubles. So the bodybuilder again filed a divorce petition for the second time from Van Damme saying irreconcilable differences" in March 2015.

But a few days later, she cancelled the divorce after realizing that she and Jean still have a strong connection with each other despite their problems.

How Many Children Does Gladys Have?

Altogether, Portugues has two beautiful adult children. She and her husband Jean, 66, are loving and proud parents of two kids, a son Kris Van Damme and a daughter Bianca Bree.

Both of them are pursuing their career in the entertainment industry as an actor. Kris Van has worked in films such as Universal Soldier (1992), Derailed (2002), Universal Soldier: Regeneration (2009) and Soldiers (2014).

In 2007, Bree made her acting debut with the film The Shepherd playing the role of Kassie Robideaux. Also, she featured in her father Jean's directed film Soldiers, and Assassination Games (2011).

How Much Is Gladys Portugues' Net Worth?

The 5 feet 5 inches tall Gladys Portugues has a net worth of $1 Million as of 2020. She has amassed her fortune throughout her multiple careers as a bodybuilder, fitness model, and actress. In the 1980s, she was regarded as one of the most notable stars in the female fitness.

Her portrayed 1986's film The Morning After has made $25.1 million at the box office, starring Jane Fonda, Jeff Bridges, and Raul Julia. Similarly, she has made appearances on various bodybuilding magazines such as Strength Training for Beauty, Muscle Training, Flex, and Muscle & Fitness.

Meanwhile, her husband Jean-Claude has an impressive net value of $40 million. He has accumulated his total worth throughout his acting and marital gigs. From 1991 to 1995, he made around $40 million in base salaries.

Gladys was born on September 30, 1957, in Manhattan, New York City, New York United States. However, there is no information concerning her early days.

As per her education, she studied at the Marymount Manhattan College where she started her bodybuilding and weight training career.

Visit Marriedceleb To Know More About Your Favorite Hollywood Actors And Actress.