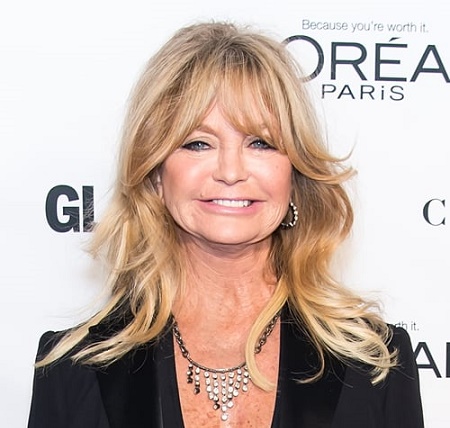 Goldie Hawn is one of the well-known American actress, dancer, singer, and producer who has been active for 52 years in the entertainment world. Likewise, she came to fame when she portrayed as regular cast member Goldie on a sketch comedy show, Rowan & Martin's Laugh-In from 1968–1973.

Goldie Jeanne Hawn was born on November 21, 1945 in Washington, D.C. Her father Edward Rutledge Hawn was a musician while her mother Laura Hawn was a jewelry shop/dance owner. Further, she has one brother, Edward Hawn, and one sister, Patricia Hawn. She holds American citizenship and belongs to the mixed ethnicity.

The long-lasting pairs in Hollywood first met on the set of The One and Only, Genuine, Original Family Band in 1966. But later they reconnected while filming the Swing Shift and started dating since Valentine's Day 1983.

Nonetheless, rumors circulated in 2000 and again in 2014 that they were on the verge of breaking up. But the later reunited. Recently in early 2019, Russell and Hawn have celebrated their 35-years of togetherness.

From their relationship, they gave birth together to their son, Wyatt Russell on July 10, 1986.

Her Past Marital Relationship

Before Kurt, the Cactus Flower's star Goldie, 74, was married to dancer (later director), Gus Triknois. They tied the knot on May 16, 1969 in Honolulu, Hawaii. But, they got separated on April 9, 1973 after four years of union.

Then Goldie who is 1.68 m tall started dating an stuntman Ted Grossman, Italian actor Franco Nero, and Swedish actor Bruno Wintzell. Then she went to marry an actor, Bill Hudson, whom she first met on a first-class flight from New York to L.A.

The exes spouses got hitched on July 3, 1976. Their wedding function took place in Takoma Park, Maryland in the presence of family members. From their marriage, they had two kids, one son, Oliver Hudson, and one daughter Kate Hudson. But, unfortunately, they were separated in March 1982.

What is Goldie Hawn's net worth?

Goldie Hawn has accumulated $101 million net worth as of June 2020. She has made that amount throughout her acting and producing career.

Meanwhile, his partner, Kurt Russell also shares $100 million worth, which he has obtained from his successful acting work. Apart from that, Hawn and Kurt listed their mansion for asking price of $13.5 million in 2019.