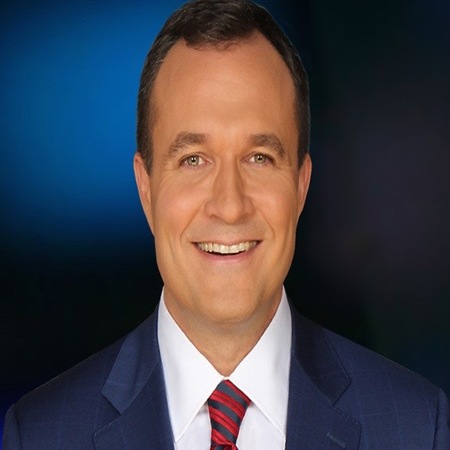 Greg Kelly is an American news anchor and journalist. Furthermore, he is popular as the host of "Greg Kelly Reports" on Newsmax TV. Previously, he used to co-host Good Day New York on Fox 5 NY WNYW along with Rosanna Scotto from 2008 to 2017. Apart, he was also a co-host of Fox and Friends and White House correspondent for Fox News. Besides, Greg is also a Lieutenant colonel in the U.S. Marine Corps Reserves.

He holds an American nationality and belongs to white ethnicity. Kelly attended Fordham University and completed a Bachelor of Arts in Political Science. While attending Fordham, Kelly also worked at WFUV as an on-air reporter.

Who is the wife of Greg Kelly? Does he share children?

Well, Greg, 51, is a married man. He is married to his long time girlfriend turned wife, Judith Grey. Moreover, his wife Judith is an Australian creative director in advertising. However, the couple met for the first time in 2015. Since after the couple started to each other. As a matter of fact, every relationship has up and down the same here in his also.

Back in 2016, the love birds broke up and later in 2017 again came back together. Moreover, Greg and Judith finally walked down to aisle on November 12, 2017. Their wedding took place at the University Club of New York in front of family and close friends.

Since after their wedding, the duo is living a happy married life and often appears together by holding each others' hands. So far, there is no news of their separation and divorce. Besides, the couple became parents of a beautiful daughter recently in February 2020. As of now, Greg is enjoying his happy married life with his wife and newly born baby girl.

American news anchor, Greg Kelly has earned a hefty amount of net from his career as a journalist. However, his exact net worth is still under review. But, his predicted net worth figure is around $3 million which is similar to Spencer Tillman and Max Minghella.

On the other hand, the average salary of an American news anchor ranges from $61,122 per year. Apart, he also has a YouTube Channel @GregKellyReports with 12.1K subscribers. According to SocialBlade, his channel monthly earning is $234-$3.7K and yearly earnings of $2.8K-$44.9K.

Besides, Kelly also served as an officer in the U.S. Marine Corps Reserves from 1991-2000 which might help him to uplift his income. As of now, he is living a lavish and luxurious life with his wife and a baby girl.

Talking about the professional life, Greg started his officially broadcasting career as a morning news anchor at ABC affiliate WIVT-TV. After working in WIVT-TV, he later joined NY 1 as a political reporter and covered the 2001 mayoral campaign. Besides, he also provided an extensive live report from Ground Zero in 2001. Back in 2001, he joined Fox News.

Moreover, he reported live broadcasting pictures of U.S. military forces reaching Baghdad on April 5, 2003, for Fox News. Kelly also reported an exclusive video during the storming of Saddam Hussein's presidential palace. Previously, he used to co-host Good Day New York on Fox 5 NY WNYW along with Rosanna Scotto from 2008 to 2017. Currently, he is popular as the host of "Greg Kelly Reports" on Newsmax TV.