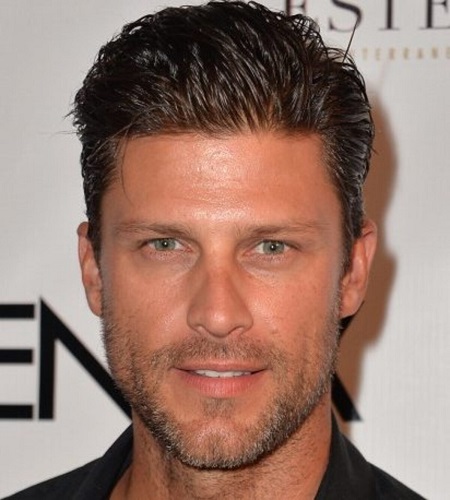 Also, he starred as Detective Calvin in drama television series, Queen Sugar from 2016 to 2019. Today let's find out more interesting details about him in the given sections.

Engagement To Actress, Angie Harmon in 2019

Yes, The Young and the Restless' actor Greg Vaughan, 47, is officially off the market. He is living a happy love relationship with his fiancee, Angie Harmon, 48. She is an American actress and model who is famous for her role Rizzoli & Isles.

It is speculated that Greg and Angie started dating in 2017. Later, their friendship turned into love affairs in 2017. After two years of relationship, the couple announced their engagement on Christmas on December 25, 2019.

On her Instagram post, the actress Harmon shared a slideshow of snaps from their precious moment. As per her post, Vaughan popped the question to his girlfriend, Harmon infornt of their kids.

The 1.82 m tall Vaughan is a divorced man. He was once married to his now-estranged wife, Touriya Haoud for eight years. She is a Dutch actress, singer, and as well as model.

The exes spouses got hitched on June 4, 2006, in an intimate ceremony. However, Greg and Vaughan announced their separation on  April 14, 2014. Later they finalized their divorce.

During the nuptials of seven years, Angie and Touriya were blessed with three sons. At first, they welcomed their firstborn child or eldest son, Jathan James Vaughan on born May 4, 2007.

What is Greg Vaughan Net Worth?

Greg Vaughan has a staggering net worth of $8 million, according to Celebrity Net Worth. He has accumulated his fortune through his acting and modelling career. Well, he is active in the entertainment industry since 1996.

During his career to date, Vaughn is best known for starring in over 600 episodes of Days of Our Lives and General Hospital. So, he might be paid a good amount of salary. Further, he has done modelling assignments for Ralph Lauren, Tommy Hilfiger, and Banana Republic.

His other film and TV credits are 90210, Will & Grace, Beverly Hills, The Love Boat: The Next Wave, Borderline Murder, Nash Bridges, and Buffy the Vampire Slayer. Apart, he is a spokesman for I Can't Believe It's Not Butter.

As per his education, he is graduate of Mesquite High School, located in Mesquite, Texas. So far, he holds American citizenship and is of white ethnicity.