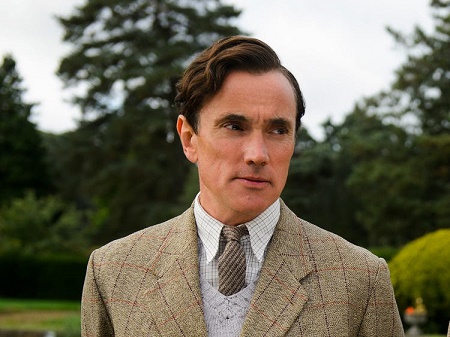 Did you see the web series on Netflix's historical thriller, The Crown? If you have then you know the character, Lord Louis Mountbatten, played by English actor and producer, Greg Wise in Season 1-2. Added to that, his other notable works include Cranford (2007), The Moonstone (1997), The Outcast (2015) and others. Wise further shared the screen with his partner, Emma Thompson in Sense and Sensibility back in 1995.

Born as Matthew Gregory Wise on 15 May 1966, Greg holds British citizenship and is of white ethnicity. Likewise, he grew up in Newcastle upon Tyne, the United Kingdom with architect parents and a late sister Clare. So far, he studied at St Peter's School, York, Heriot-Watt University before starting his acting career.

The Hollywood actor who holds his education from the Royal Scottish Academy of Music and Drama now shares a strong marital relationship with his wife, Emma Thompson. Well, Emma is also a leading actress who holds many accolades like a Primetime Emmy Award, three BAFTA Award, and two Academy Awards during her entire acting work.

Greg Wise, 53 and his wife, Emma, 60 shared the wedding vows on July 29, 2003, at a private ceremony. The big day was held among their friends and family in Dunoon, Scotland. Likewise, Wise fell in love with his future wife, Thompson on the set of Sense And Sensibility and shortly they started dating.

Greg and Emma have already become parents of one daughter, Gaia Romilly Wise, who was born on December 4, 1999, before getting hitched in 2003. The pretty girl, Gia, 20, happily attended the wedding of her parents and even served at the ceremony as the flower girl.

Following the marriage years, the couple also adopted a Rwandan orphan and former child soldier son named Tindyebwa Agaba Wise, 31. At the time, Tindyebwa was just 16 years old. And Daily Mail reports that the father of Agaba had died from AIDS when he was nine. Similarly, his mother and sister were identified as missing during the Rwandan genocide in 1994.

Henceforth, the boy was able to escape to the UK with the assistance of a humanitarian charity, where he eventually met his adopted mom, Thompson and dad, Wise.

Kenneth Branagh is an Ex-Partner of Emma

Before Wise, The Further Tale of Peter Rabbit's author was previously in a wedded life with her divorced husband, Kenneth Branagh, a Northern Irish actor. The exes who got married in 1989 parted their ways in 1995 after six years of togetherness.

Actually, Kenneth, 59, was the reason for their split because he allegedly had an extramarital love affair with actress Helena Bonham Carter, 53. Likewise, they fell in love on the set of Mary Shelley’s Frankenstein in 1994 just one year before Branagh and Emma getting divorced.

What happened to Greg Wise's sister?

The actor announced his 51-year-old older sister Clare died of cancer on 15 August 2016 just hours after he asked her to "let go" He also announced in 2016 that he had nursed her through the illness, accompanying her to hospital appointments, and even encouraging her to shower while she was getting worse.

During her illness, Clare maintained a journal entitled Not That Kind Of Love, which is both funny and tragic-this is now turned into a novel. Born in 1964, late Clare Wise was 18 months older than Greg and they were raised in the North of England together.

After losing his own sister, Greg has taken part in the five-part series of The Great Stand Up To Cancer Bake Off.  In turn, the star must compete against a whole host of other celebrities including Russell Brand, Big Narstie, and Johnny Vegas.

How much is Greg Wise worth?

Working in the media industry since 1992, Greg Wise definitely made a heavy amount of money throughout his acting and producing career. He enjoys an impressive net profit worth $1.3 million as of 2020, which is considerably less than his The Crown's co-star Charles Dance who holds $5 Million assets.

Likewise, Greg had his first role in 1992, starring in one episode of the TV series, Covington Cross, setting him up for other on-screen debuts. Similarly, he had acting credits in a variety of small and big screen shows including Years and Years, King Lear, The Crystal Cube, The Crown, Love Actually and Last Christmas, among others.

Having such an incredible career behind him, all this experience will certainly add to his tremendous success over the past few years.

On the other hand, his wife Emma is one successful actress in the United Kingdom. As a British actress and actor, she would have made considerable money. Her net worth is reportedly approximately 50 million as of 2020. Emma's credits for television and film include Love Actually, Nanny McPhee, Nanny McPhee, and the Big Bang, Save Mr. Bank, Men in Black 3 and Last Chance Harvey.