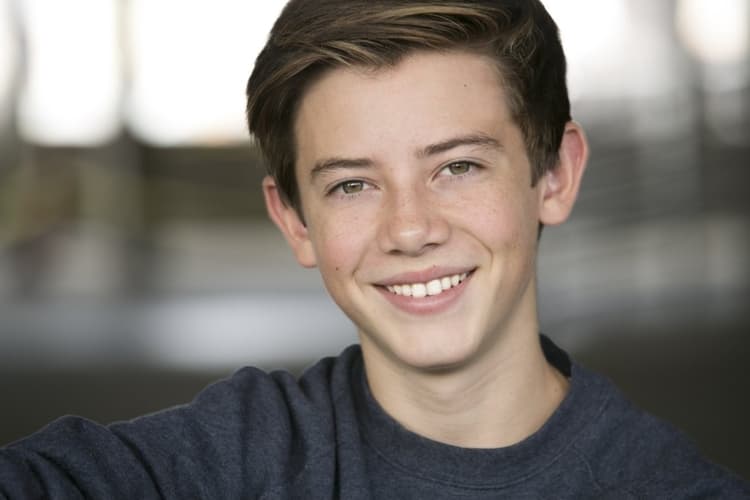 Griffin Gluck is one of the popular Young Actors in Hollywood who is just 19 years old as of 2020. His breakthrough role was in the 2011 movie, Just Go with it, where he appeared alongside Jennifer Aniston and Adam Sandler as their son 'Michael.' Recently, he appeared in the 2019 Netflix Series, Locke & Key.

The prominent actor, Griffin, was born on 24 August 2000 in Los Angeles, California, the USA. Likewise, he was born under the birth sign, Virgo. His nationality is American, and his ethnicity is white. Besides it, he can be seen by hanging out with other co-stars and celebrities. What's his relationship status? Is he dating? Let's find out in the article below.

What Is The Relation Between Griffin Gluck And Sabrina Carpenter?

The 19 years actor, Griffin's relationship status is probably single as of 2020. To date, he's rarely spilled the beans about his dating life. However, he is spotted hanging out with some of the well-known female personalities such as Ariana Grande and Ava Michelle.

Reportedly, the young actor is seen hanging around with his Tall Girls co-star, Sabrina Carpenter, who is best known as a singer. After working in the same series, the two became very good friends. The two often uploads pictures of them partying on their Instagram accounts.

Reportedly on 7 January, the two were seen having a party, and in the photographs, Sabrina was about to kiss Griffin. Similarly, the two also seen together in Halloween, and they were copying Britney Spears and Justin Timberlake.

Many fans believe that the co-stars are secret lovers but there is no confirmation about the rumors. Neither Griffin nor Sabrina confirmed that they are dating each other.

As a matter of fact, Griffin has been active in the entertainment industry since 2011. According to many online reports, Gluck's net worth is around $1 Million as of 2020. To date, he has appeared in over 15+ movies and 20+ TV series.

Additionally, the film that he played Just Go With It earned over $214,945,591 worldwide. His other films has also made a lucrative sum of money as well. Without a doubt, he must have bagged a lot of dollars from these box-office movies.

Besides, he must be earning thousands of dollars from endorsements deals and promotional works. His Instagram account has over 1.2 Million followers as of now. Without a doubt, Griffin must be living a lavish lifestyle with all of his earnings and fortune.

Griffin started his career as an actor in 2009 when he was just nine years old. That year, he appeared as a Pharmacy boy in the movie, Sideways aka Saidoweizu. Since then, he has appeared in over 15+ films until now.

His career breakthrough as a child was his second film, where he appeared as the son of Jennifer Aniston and Adam Sandler, Michael. Some of his movies are:

Besides films, he has also appeared in over 10+ TV series until now. Some of them are:

Recently, he appeared in Locke & Key alongside Connor Jessup and Laysla De Oliveira. Locke & Key is an American comic book series which was written by Joe Hill and published by IDW Publishing.

In the series, he plays the role of a new boarding student at Matheson Academy and befriends Kinsey Locke. The series is about the time of the American Revolution when a group of rebels hides in the future Keyhouse and found a portal to another dimension.

Height And Age Of Griffin Gluck

The handsome hunk, Griffin, is loved by many girls across the country for his looks as well as for his acting skills. He stands in a height of 5.8 feet (171 CM), and his weight is around 68 Kg.

His biceps size is 16, Chest 42, waist 30, and hips 35. Griffin's shoe size is nine, and his eye color is blue, followed by his beautiful brown hair.

Stay Updated With Married Celeb for more Biographies and Gossips of American Actors!!!