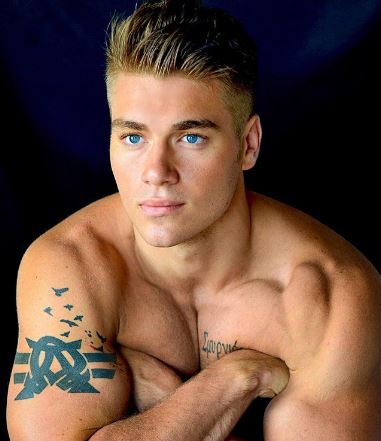 Who is Gus Caleb Smyrnios?

Do you remember the American reality television series Floribama Shore? If yes, then you must be familiar with the same Gus Caleb Smyrnios who portrayed as a cast member. He is an American model and actor who has has been the cover face of many romance novels. Additionally, Caleb has modeled for commercial brands.

Gus Caleb Smyrnios was born on 20th March 1995, in Tallahassee, Florida, United States of America. As per his bio, Gus' zodiac sign is Pisces. He holds American citizenship and ethnicity is unknown. In addition, he has one brother Seth and a sister Leah. He completes his graduation from the Tallahassee Community College.

Smyrnios started his acting career from the MTV series  Floribama Shore in 2017. After the show, he got fame and name in the media industry. Likewise, he worked with Nilsa Prowant and Candace Rice in MTV series Floribama Shore.

Besides acting, Caleb is a model who appeared on the cover of several romance novels. Further, he has modeled for many commercial brands. Currently, he is just focusing on his job. He will definitely receive some prizes and awards in his career in the near future.

With a successful career, Gus Caleb has managed to earn quite a money for himself. Well, he pockets a healthy amount of fortune from his profession as an actor and model. Likewise, he enjoys a handsome salary and an impressive wealth currently. As of 2019, Caleb's net worth is allegedly about $100,000.

As a model, Caleb Smyrnio has gained lots of fame and good pay. He worked as a book cover model for  ‘Luc’ by Jennifer L. Armentrout in 2018. Besides this particular book, Gus has appeared many other books, and also for Armani fragrance.

Hence, Gus is living a luxurious life as shown on social networking sites. His pictures show that he is wearing expensive clothes and spending his time in a luxurious house and hotel. Well, he frequently travels and enjoying his rich lifestyle in a lavish way.

Gus Caleb has a lot of girls going crazy about his dashing looks and height. However, as his personal life appears to be empty, no one seems to have impressed the star to date. Till date, Gus is unmarried and also hasn't spotted or associated with any females who could be tagged as his girlfriend.

Going through his Instagram profiles, Caleb hasn't shed any hints on his love affair via post. So, it looks like he is not dating anyone currently or want to keep his private life so private that no one is aware of it. However, he frequently shares different pictures along with some girls via Instagram but none of them is coming out as a girlfriend. According to the reports, the 24 years old actor is single and enjoys his singledom in an elegant way.

Nevertheless, Gus tried to date one of his roommates, Nilsa Prowant in Season 1 of American reality series, Floribama Shore in 2017. He even asked for the date, but, Nilsa rejected his offer.

When comes to Caleb and Prowant's social media pages, there are no hints that the two are in a relationship but we can found some pictures of them. It might be because they want to keep their love affair under the wraps or they are just good friends.

Unlike Tereza Kacerova, there are no dramatic rumors of his private and professional lives so far. Moreover, Smyrnios has never been controversial in his career. At such a young era, instead of entering into a controversy, Gus focuses on his job only.

The American actor, Gus stands at the height of 5 feet 11 inches and the weight of 70 kg or 154lbs. Talking about his body measurements,  Smyrnios has a muscular body with the measurement of 39-13-31 inches. Besides this, he has attractive blue eyes and blonde hair.

Caleb has three tattoos on his whole body. The first tattoo on his left chest with the word Σμψρνιοσ and the next one is in his right arm.

The third tattoo is on his back which looks like old staff or something.