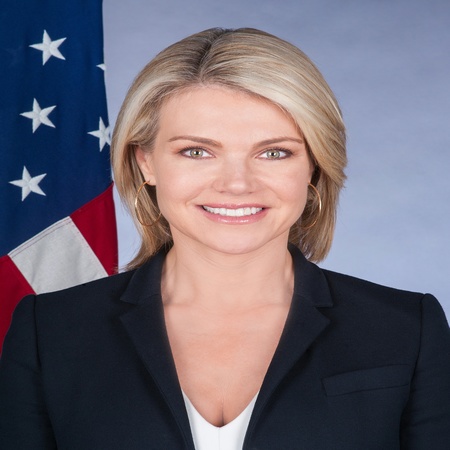 Heather Nauert is an American broadcast journalist and former governmental officer. Moreover, she worked as Spokesperson for the United States Department of State from 2017 to 2019. Before joining the Department of State, she also served as an ABC News correspondent and news presenter on the Fox News program Fox & Friends. Besides, Nauert is also a member of the J. William Fulbright Foreign Scholarship Board and the President's Commission on White House Fellowships since 2019. Apart, Heather is currently a senior fellow at the Hudson Institute.

The former Fox News anchor & correspondent, Heather Nauert was born as Heather Ann Nauert on January 27, 1970, in Rockford, Illinois, USA. She is the daughter of father, Peter Nauert, an executive in the insurance industry and her mother's name is Cheryl Nauert. She grew up with her three brothers, Justin Nauert, Jonathan Nauert, and Joseph Nauert.

Well, Heather, 50, is a married woman. She is married to her long time boyfriend turned husband, Scott Norby. Her boyfriend-turned-husband, Scott is an investment banker who served at Goldman Sachs. The couple walked down to the aisle and tied the knot in 2000.

Since then their wedding, the duo is living a happy married life and also shares a strong bond between them. Therefore, we don't have any news of their separation and divorce yet. Besides, the couple shared two lovely children.

Moreover, they became parents for the first time with a baby boy, Peter Norby born on October 7, 2009. Furthermore, their second child, Gage Norby was born in 2010. Currently, she is very busy taking care of her children's physical and mental health. As of now, Heather is living a happy life with her husband and two sons in the United States.

How Much Is The Net Worth Of Heather Nauert?

The 5 feet and 5 inches (1.65 m) tall, Heather has amassed a hefty amount of net worth from her career as a journalist and former governmental officer. Furthermore, she has an estimated net worth of $3 million which is similar to Contessa Brewer and Robert Wahlberg. Besides, her average annual salary is $500,000 per year.

On the other hand, she used to work as a news anchor and correspondent which might also earn her a decent amount of money. She is an animal lover and also has two pet dogs. As of now, Heather is living a lavish and luxurious life with her husband and two sons.

The talented and beautiful, Heather started her career in 1996 as a reporter for the syndicated business program First Business. Further, she joined Fox News and worked there from 1998 to 2005 as a contributor and later as a correspondent. Back in 2007, he returned to Fox News and also co-anchored the newscast Good Day Early Call and Good Day New York Wake Up.

Besides, she also a news presenter for Fox & Friends. Additionally, she appeared in two tv shows called Brother's Keeper and 24. In April 2017, Heather joined the University States Department of States as a Spokesperson. On February 16, 2019, Nauert withdrew her name from consideration to become United States Ambassador.  Apart, Heather is currently a senior fellow at the Hudson Institute.