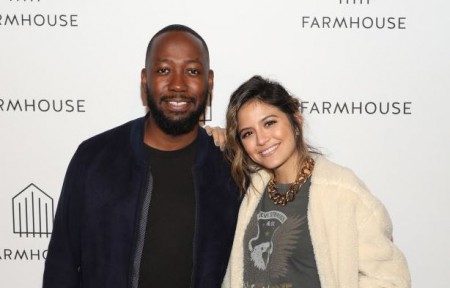 Celebrity couples bring a lot of positive inspiration and passion with their relationship. Even a little bit of gossip makes us wonder what is happening in their lives. But, what happens when people see their idols getting heartbroken? Well, today we are presenting you with the most interesting couple on television history.

Erin Lim, a beautiful television personality and Lamorne Morris, an actor, made major headlines back in 2016. Lim is the host of The Rundown on E! News, while Morris is known for his role on Fox sitcom, 'New Girl.'

Who is she Dating Now?

E! News correspondent is currently in a relationship with a Graphic Designer Joshua Rhodes. Scrolling through Lim's Instagram, we can see photos of them together visiting different places.

There are no exact records of when they start dating each other, but the pictures suggest they started dating in 2019. Scrolling through Lim's social media, the pair first images together is posted in July of 2019.

Lim is known for her association with E! News as it's correspondent. Her notable work includes hosting the popular Snapchat series called "The Rundown." The sexy TV host rapidly gained a massive fan following.

Hence, when she declared her relationship with an actor, Lamorne Morris in 2017, fans went crazy to know about them.

In July 2016, Lim and Morris shared an intimate picture on their social media without declaring their status. However, one year later, the couple announced their romance publically. They even attended the 2017 Emmy Awards in September 2017.

The 29-year-old Erin Lim and the 36-year-old Morris maintained a low-profile while they first began dating in 2016. There are no details on Lim's past affairs, but Morris actually signed for online dating in 2015.

Morris revealed through social accounts that he was in search for a girlfriend. Hence, an online dating app brought them together.

Back in 2018, rumors of Erin's secret marriage with Morris went viral on the internet. She uploaded a picture of them vacationing together in France on her Instagram. But later she removed that picture.

Lim and Morris attended Cannes festival like a married couple. So, people assumed that they had already tied the Knot. However, the rumors turned out to be false, so as of now, they are not married.

Have they Broken Up?

As mentioned, Lim and Morris are not married. So, are they still dating? Well, no the girlfriend-boyfriend duo has separated. There are few possible events to claim that Lim has broken up with Morris. The major being Lim being in a relationship with Rhodes.

For instance, Erin has deleted her vacation pictures, and she rarely makes any appearance with Morris. Further, in September 2019, news reports surfaced that Lim and her partner of three years had split up.

To know about your favorite reporters, please follow Married Celeb!!!