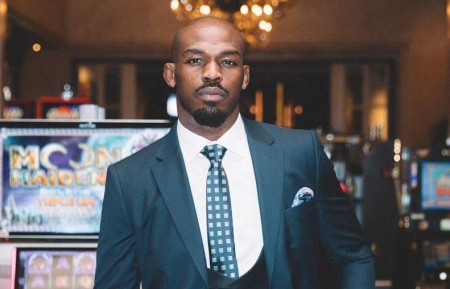 Jon Jones was born as Jonathan Dwight Jones on July 19, 1987. He is among the four children born to Arthur Jones Jr. and his wife, Camille Jones. He siblings is Arthur Jones, Carmen Jones, Chandler Jones. His father was a pastor at the Pentecostal church in Endicott, New York, and his mother was a nurse. In June 2017, Jones' mother passed away after losing her long battle against diabetes.

Jones is engaged to his High School Sweet Heart

Jon Jones is engaged to his long time girlfriend, Jessie Moses. The couple is the high school sweethearts. They met while they were in high school and started dating soon after that. After graduation, both were separated, but their relationship did not make much worse.

The couple welcomed their first daughter, Leah, in 2008. It was the same year, Jon made his professional debut in the UFC ring. Then in 2009, they had another child, Nicole Jones. Jon announced in 2013 that he was expecting a baby.

Much to everyone's surprise, In a interview with Joe Rogan back in December 2016, Jon said that he had four children. He has a daughter born before Leah from another relationship. More than this, the media is not aware of anything.

The couple is yet to get married. More about that has not been shared with the public, as they are expected to tie their knot soon. Jon announced his engagement through his Twitter Page on April 1, 2015.

Net worth and Salary of Jon Jones

Jon Jones has a net worth of $10 Million. He began wrestling in high school and went on to win state championships. He has earned more than $7 Million from his Pay-Per-View. Luke Lesnar, father Brock Lesnar, is among the highest-paid UFC fighter. In February 2020, Jon Jones set the UFC Record with win over Dominic Reyes.

The average salary of a UFC Fighter is $150,000. However, Jon has been earning way much more than the average Salary. In 2019, Jon made more than $2 Million from his four fights. He is expected to earn more in upcoming days.

Jon is the first mixed martial artist to be sponsored by Nike on an international scale. However, this sponsorship deal could not last long. This deal was cut off soon after Jon was involved in public and semi-public verbal salvos during a series of subsequent appearances. He was fined $50,000 and 40 hours of community service for his role in the brawl.

After the Sponsorship broke up with Nike, Reebok seemed to be interested in a deal. Reebok terminated their sponsorship agreement of $30,000 a fight after his next suspension for tainted supplements. Jon reportedly made $750,000 off the sale of his New York home back in 2017. Jon has also come out publicly and said he has about $2 million in Real Estate investments.