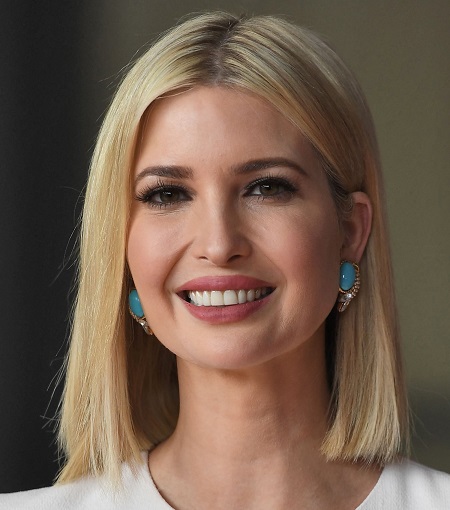 Ivanka Trump is an American businesswoman who is best known as the daughter and second child of the current and 45th president of the United States, Donald Trump and his first wife, Ivana. Now, she serves as an Advisor to her President father Donald since 2017. Before that, she worked as a model on the cover of various magazines such as Forbes Life, Golf Magazine, Harper's Bazaar, Town & Country, and Vogue.

Trump was born on October 30, 1981, as Ivana Marie Trump in Manhattan, New York City. Her parents Donald and Czech-American model Ivana divorced in 1992 when she was ten years old. Further, she has two brothers named Donald Trump Jr. 42, and Eric Trump, 36, and has one half-sister, Tiffany TRump, 26, and a half brother Barron Trump, 14.

Until Ivanka was 15, she studied at Chapin School in Manhattan. After completing her graduation from Choate Rosemary Hall in Wallingford, Connecticut in 2000, she studied at Georgetown University for 2 years.

Yes, it is true. Ivanka marries Jared Kushner, the real-estate developer, and newspaper publisher. Now, he also serves as a senior advisor to the to his father-in-law, Trump.

Trump, aged 38, and Kushner, 39, walked down the wedding aisle on October 25, 2009, in a Jewish ceremony. Their big day took place at Trump National Golf Club in Bedminster, New Jersey. They announced their engagement in Augst before three months of their marriage. So, they enjoyed their love romance for four years before tying the knot.

Likewise, they first met through a mutual friend in 2005. Following their three years of a love relationship, they had broken up due to the objections of Kushner's parents, Charles Kushner and Seryl Kushner. But they got back together and both of them converted to Orthodox Judaism in July 2009.

Now, they are happily married for one decade without any problems. From their healthy marriage, they have three children together. Their firstborn daughter Arabella Rose Kushner was born in July 2011 and while their second-born son Joseph Frederick Kushner was born in October 2013. Theodore James Kushner is the youngest son born in March 2016.

Before marrying Kushner, the 1.8 m tall Ivanka has been in few romantic relationships with her exes. Initially, she dated a Greg Hersch, an investment banker at Salomon Brothers, Bear Stearns, and UBS.

They first met at Georgetown University and were together for nearly four years until 2001. More, she had a connection with socialite James "Bingo" Gubelmann from 2001 to 2005.

Further, Trump was briefly linked to Justin Murdock, a Senior Vice President of Investments of Castle & Cooke. They were together until 2006. After that, she moved on Pierce Brosnan's son, Sean Brosnan, an actor and director in 2007.

What is Ivanka Trump's Net Worth?

As of 2020, Ivanka Trump has a net worth of $300 million. She has amassed her worth throughout her business career including commercials advertising the Trump Organization and her numerous jewellery items. Meanwhile, her husband, Jared Kushner's net worth is approx. $800 Million.

Ivanka and Kushner who currently serves for presidential administration as a senior adviser have an income of around $36 Million. Early in her modelling career, she has done modelling for various brands such as Sasson Jeans, Tommy Hilfiger, Versace, Thierry Mugler, and Marc Bouwer.

Trump further featured on the cover of Seventeen in May 1997, and Stuff in August 2006 and September 2007. On the other hand, her dad, Trump, the current president of United started, has a net worth of $2.1 billion, as per Forbes. But previously his total worth was estimated at $3.1 billion.

To Read more Biographies and Gossips on Businesswoman Stay Tuned to Marrriedceleb!!!