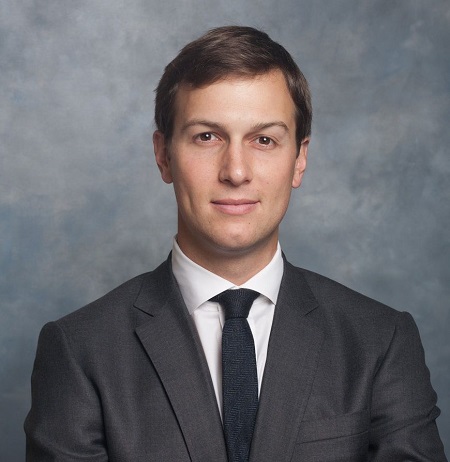 Jared Kushner is an American investor, real-estate developer, and newspaper publisher who is best known for being the senior advisor to the president of the United States. Since 2017, he has been working as a white house innovations director. Now, he is a co-founded online real-estate investment platform, Cadre.

He was born on 10 January 1981 in Livingston, New Jersey, the United States as Jared Corey Kushner. He is the oldest son of former real-estate developer and convicted felon, Charles Kushner and Seryl Kushner. He has a younger brother, Joshua Kushner, a businessman, and two sisters, Dara Kushner, Nicole Kushner.

Jared who raised in a Modern Orthodox Jewish family graduated from the Frisch School, in 1999. Then he studied at Harvard University from 1999 to 2003, where his dad Charles donated $2.5 million to the University in 1998 before he was admitted.

Who is Jared Kushner's Wife?

She is none other than, Ivanka Trump, President Donald Trump's daughter and fellow advisor. She is an American businesswoman who is serving as an Advisor to her President father, Trump since 2017.

39, Jared met his future wife, Trump, 38, through a mutual friend in 2005. Before their wedding or after three years of their love romance, they had broken up due to the objections of Kushner's parents. But they got back together and both of them converted to Orthodox Judaism in July 2009.

Finally, the lovebirds exchanged the wedding vows on October 25, 2009, in a Jewish ceremony. Now, they are happily married for decades without any problems. From their beautiful marriage, they have a daughter Arabella Rose Kushner born in July 2011 and two sons Joseph Frederick Kushner born in October 2013 and Theodore James Kushner born in March 2016.

Before Kushner, the 1.8 m tall Ivanka was in a romantic love relationship with her now former boyfriend, Greg Hersch. He is an investment banker at Salomon Brothers, Bear Stearns, and UBS.

The couple who first met at Georgetown University were together for nearly four years until 2001. More, she also dated socialite James "Bingo" Gubelmann from 2001 to 2005.

Afterwards, she supposedly rebounded from James with Lance Armstrong, the Livestrong founder and now-disgraced Tour de France winner. Following her break up with James, she briefly dated "That 70s Show" star Topher Grace.

Prior to meeting Jared, Trump was briefly linked to Justin Murdock, a Senior Vice President of Investments of Castle & Cooke. They were together until 2006.

After that, she moved on Pierce Brosnan's son, Sean Brosnan, an actor and director in 2007.

American real estate developer, Jared Kushner has a staggering net worth of $800 million as of 2020. He has amassed his worth as the CEO of Kushner Companies and as the publisher of the Observer. While his wife, Ivanka's total net value is around $300 million. Now, they have an income of around $36 Million.

Also, the Kushner Companies has expanded the business and obtained approximately $7 billion value around the nation, much of it in New York City. Recently in 2019, it bought a home portfolio for $1.15 billion dollars. Further, he made $1.5 million in income from Westminster Management between April 2017 and June 2018.

Likewise, Jared purchased a weekly New York City newspaper, The New York Observer for $10 million in 2006. But in January 2017, he was replaced by his brother-in-law, Joseph Meyer. Further, Kushner and his wife Ivanka are the beneficiaries of a $710 million real estate business and investment business trust.

They also bought an art collection worth about $25 million. Ivanka and Jared reportedly made $82 million in outside income in 2017 at the same time when they two served as a senior White House advisors. Similarly, Jared donated over $10,000 to Democratic campaigns since his age 11.