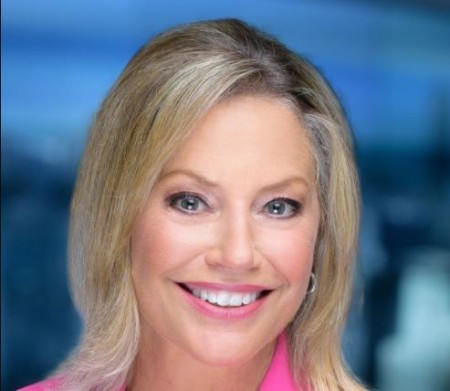 Jackie was born on September 8, 1961, in the United States. She is 58 years old as of 2020. Bange graduated with a post-baccalaureate degree in Telecommunications from the University of Florida. Similarly, she has an undergraduate degree in Management Information Systems from Florida State University.

Jackie has been married to her longtime husband, George Strickland, since 2000. George is a former Lake County Assistant State's Attorney. The couple first met at a rooftop party for a Cubs game in 1999, where a mutual friend had introduced them. After dating for a while, Jackie and George got engaged in August 2000.

The couple has been married for nearly 20 years as of 2020. Bange and her husband, George has three children, a son named Josh and twin daughters, Gracie and Sunny. Despite having a hectic schedule, Bange manages to spend as much time with her family. She often shares pictures of her husband and kids on scoial media.

To date, Bange hasn't been involved in any controversies. There is not much information about her personal life with her husband, Strickland. However, it seems the family has a very strong bond. As of now, her son Josh is in his late teens, while her daughters study in 9th grade.

In her free time, Bange loves to travel, skydive, visit exotic places with her kids. When she gets a chance, the reporter takes her husband for a romantic date as well. She is an avid adventurer also. In 2009, Jackie completed the Olympic length of the Chicago Triathlon. Before marrying George, Bange had a short-lived relationship with her television executive producer Dale Chapman.

The WGN-TV weekend anchor, Jackie Bange, has a net worth of $1 million, which is slightly higher than the network's weather anchor, Morgan Kolkmeyer. She has been active in the journalism industry for the past 30 years. She is still passionately working as a reporter is one of the most liked journalists. Further, Jackie earns an annual salary of over $42,323.

On average, the television reporters/anchors' salary ranges somewhere between $38,121-$71.032 per year. Throughout her career, Bange has received positive acclaim. Hence, she earns a desirable income from her profession.

Jackie began working for WGN-TV from August 1993. She co-anchored the WGN Morning News till October 1995. Further, in 1999, Bange won a regional Emmy Award for Best Feature Reporting. She presented a series on a group of skydivers trying to make the world record for the largest skydive formation.

Jackie and her co-anchor on WGN!

In 2005 Bange was assigned a special report called Into the Darkness following the devastating Hurricane Katrina. She profiled two Chicago-area pilots and their crew who helped rescue hundreds of stranded residents. For her story, Bange won an award given by the Illinois chapter of the Associated Press for Best Hard News Feature.

In 2009, Bange helped a widow get justice for her husband, who was killed in a case of suspected drunk driving. She won the Peter Lisagor Award for in-depth reporting.