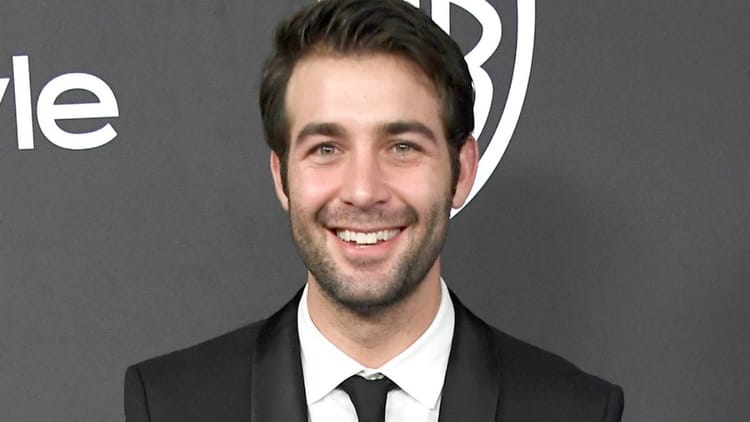 An American actor, James Wolk is best known for his epic role in Mad Men. He,furthermore, has starred in numerous TV series and movies. Currently, he is busy in the Post-production of Spinning Gold where he is playing the role of Larry Harris.

Born on 22nd March 1985 in Farmington Hils, Michigan, he is Jewish by birth and raised in Reform Judaism. James is the son of the shoe store owner, father, Robert Wolk and art teacher, mother, Edie Wolk. In 2003 he graduated from North Farmington High School and later grabbed his master from the University of Michigan School of Music, Theater & Dance in 2007.

How did James found his Love?

James met the love of his life Elizabeth Jae Lynch in 2013. She is a schoolteacher and they first met while both of them were volunteering at Camp Twitch and Shout.

Within a first encounter, both were very impressed by each other which lead them to exchange their contact. After multiple dates the pair started to live together and decided to take their relationship further.

In March of 2015, James proposed his soul mate, Byrd, by kneeing down on the walk with the dog at sunset, to which the response was sure yes.

In the same year of their proposed date, the pair exchanged wedding vows. It was 20th June 2015 the married duo accepted each other as husband and wife. Their wedding ceremony was held at Crossroads Estate, Firestone Winery in Los Olivos, California.

It was an intimate ceremony were newlyweds couple family & friends were seen there as a guest alongside many of James co-stars. As of now, the duo has enjoyed their nuptial life for over four years, during their marital interval, the pair were blessed with two children one son and one daughter.

The eldest one, Charlie Wolk was born on 30th December 2017 while the youngest one Lucy Kate was born in 2019. Further, the family of four is enjoying their life together and are often seen vacating different places together.

How Rich is James Wolk? Details about net worth and salary

According to celebrity net worth, James's net worth is estimated at $2 Million. Being one of the versatile actors in Hollywood he must have the same amount of fortune without a doubt.

During his career duration, he has appeared in many movies and TV series as an important character from which he surely has gathered a good amount of paycheck without a doubt.

His starred movie The Stanford Prison Experiment gathered a total of $18,860 worldwide. For a Good Time Call hit the target of $1,251,749 and You Again ended up earning $32 Million. Additionally, he has been engaged in multiple TV series and his estimated annual income is $500,000.

James secures a recurring role in the American superhero drama television, Watchmen as Joe Keene Jr. The series was created for HBO by Damon Lindelof who also served as a writer and executive producer.

The 52 Minutes long episode is starred by many top actors and actresses of Hollywood. Watchmen includes artists like Tom Mison, Hong Chau, Andrew Howard, and many more.

Check out the official teaser of the Watchmen!!!

Other personalities like Tim Blake Nelson and Frances Fisher has also contributed their acting on the following series.