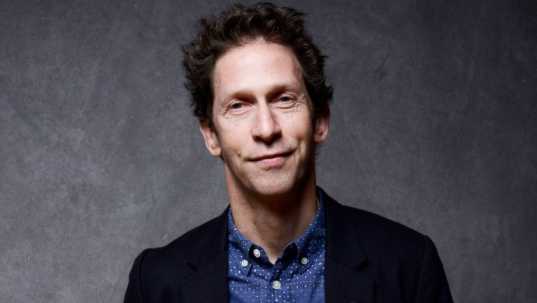 Timothy Blake Nelson, famously known as Tim Nelson is an American actor, writer, and director who is most famous for a role in Delmar O'Donnell (2000), Dr. Pendanski (2003). His career breakthrough was The Incredible Hulk in 2008, and Lincoln in 2012. He has also been the part of several series like the HBO Watchmen (2019), Big City Greens and Dallas and Robo.

Tim belongs to a Jewish family. He was born on May 11, 1964, in Tulsa, Oklahoma. He attended the Oklahoma Summer Arts Institute at Quartz Mountain Resort Arts. Nelson completed his education from the Holland Hall School in Tulsa and graduated from Brown University between 1982 to 1990.

Tied In A Wedding Knot with Lisa Benavides

The 52 years old Tim Blake is a married man; he exchanged his wedding vows with Lisa Benavides during 1994. The lovely couple so far shared more than two decades together, and currently, they reside in New York City. Both of them are having a good career in the movie industry.

Tim's spouse Lisa currently serves on the faculty of NYU's Tisch School of the Arts Graduate Acting Program, including teaching and directing. She has also served on the board of The 52nd Street Project, a theater program that makes original theater with the children of Hell's Kitchen and Mr. and Mrs. Nelson are the proud parents of three children Henry Nelson, Eli Nelson, and Teddy Nelson.

The famous writer, actor, and director, Tim came from the mixed ancestor where his mother Ruth (nee Kaiser) Nelson, is a German but born in Britain and moved to the U.S. as well as his father Don Nelson, who is a Russian Jewish who immigrant to the U.S between the mid-'60s.

Moreover, Nelson's father is a geologist and wildcatter, where his mother is a noted social activist and philanthropist in Tulsa. In addition, Tim's maternal uncle George Kaiser is a famous businessman based in America.

When someone has multi-streaming income sources, then obviously he owns millions of dollars. Similarly, the actor-director and a writer, Tim owns a staggering net worth of $4 million. However, most of his fame and wealth came from the directing profession.

He appeared in Marvel Comics adaptations The Incredible Hulk with Clancy Brown where he gained around $800,000. Co-supporting role in Fantastic Four has earned him $0.85 million, and appearing in Lincoln movie, he must have received $550,000.

Not only Hollywood movies, but he has also been part of several T.V series like Big City Greens, Watchmen with Louis Gossett jr, Dallas & Robo with Sophie Dymoke, and Wormwood, where he must pocket millions of dollars. Currently, he is living with his family in a $1.5 million dollar penthouse, which is 3,900-square-foot with a combination of a ranch house with somewhat like a Modern Jewish house.