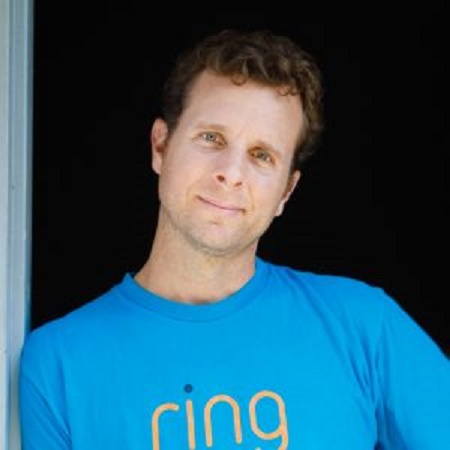 Jamie Siminoff is regarded as one of the well known American Businessperson around the globe. He is best known as the founder of home security and smart home company Ring Inc.(formerly Doorbot), which was bought by Amazon.com for an estimated value of between $1.2 and $1.8 billion in February 2018.

He was born on 18th October 1976 in Chester, New Jersey USA. He holds American citizenship and belongs to the white ethnicity. For his high school, he studied at the West Morris Mendham High School. Later he received his bachelor's degree from Babson College in Entrepreneurship.

As of now, Jamie Siminoff has been living a blissful conjual relationship with her long term partner, Erin Lindsey Siminoff. She is a graduate of Pepperdine University and has served at the 20th Century Fox Film Corporation.

Jamie and Erin have completed their 13 years of togetherness recently in 2019. They tied the wedding knot on 7th October 2006 in a private ceremony. Since the day, the couple leads a happy life together without any problems and difficulties.

Nevertheless, Jamie's wife Erin always remain by his side, which supported him in every aspect of his life with all these struggles in his career. From their marriage, they are blessed with one son named Oliver Siminoff who was suffered from an orphan disease called Galactosemia at the time of his birth.

Jamie Siminoff has a staggering net worth of $300 million as of early June 2020. His most income comes from his decades of professional career as an entrepreneur. After founding his company Ring in 2013, he appeared on TV show Shark Tank as an entrepreneur, where his business picked up for him.

Life As A Successful Entrepreneur

Siminoff came up with the idea of automating traditional doorbells with camera systems, an alarm system designed to improve house security. And with the help of crowdfunding, he initially founded the company Doorbot in 2013, worth $364,000. It hosts an app, Neighbors, for users to share the recorded footage online socially.

In the same year,  Jamie began to appear on an episode of Shark Tank's reality series asking for $70,000 of shareholders in his company for 10 percent. This is a value of $7 million. But he got four dismissals. His one offer, made by Kevin O'Leary, was a complex loan that Jamie rejected.

After being on Shark Tank, DoorBot changed its name to Ring and gained $5 million in additional sales. They also attracted investors such as Richard Branson, Kleiner Perkins Caufield Byers, Goldman Sachs, DFJ Growth, who eventually pumped into the company $200 million. And then, Amazon bought his company and then, as guest shark, Siminoff returned to Shark Tank.