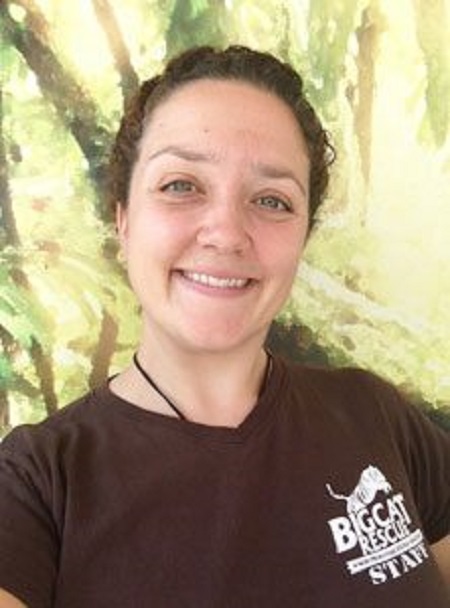 An award-winning photographer, Jamie Veronica Murdock is best known for being the single child of big-cat rights activist, Carole Baskin. She is identified as the CEO of a non-profit animal sanctuary, Big Cat Rescue, based in Tampa, Florida. Despite being the celebrity daughter, Jamie is a licensed wildlife rehabilitator who currently works as a president for Big Cat Rescue, also known as BCR.

She was born on July 16, 1980, in the Florida United States to the mother, Carole and father, Michael Murdock. Further, she has no siblings. She holds American citizenship and belongs to the white ethnicity. For her education, she graduated when she was 16 and quickly joined her mother to work at Big Cat Rescue.

Jamie is a Divorced Woman

Yes, you have read that correctly. Forty years old, Veronica Murdock is currently in a love relationship with her boyfriend, Victor Alonso, as per online tabloids.

However, before starting dating Victor, she was previously in a marital relationship with her husband, Dr. Justin Boorstein. He is a veterinary doctor for Big Cat. The former duo tied the knot on December 1, 2012, in an intimate wedding ceremony.

But Jamie and his now-estranged spouse, Justin called off their marriage and had divorced after being together for several years. But it is still unknown when they were separated. They had no kids together.

Her, Mother, Carole Has Been Legally Married Thrice

Well, her celebrity mother, Carole, aged 59, is married for three times. For the first time, she tied the knot with her boss or first husband, Michael Murdock, April 7, 1979, when she was 17. After a year, they welcomed their daughter Jamie in 1980

Sadly, their marriage fell apart soon when Murdock was found being possessive who did not allow Carole to get a job. She had once claimed she had never loved him and only wedded him because of the disappointment of her parent. As the two had lived outside together before wedlock.

Eventually, Tiger King's Netflix star went to marry Don Lewis. They started saying after leaving their respective spouses and married in 1991. But suddenly, Don was disappeared in August 1997 and was announced legally dead in 2002.

Finally, Baskin met Howard Baskin at a kick-off party for the newly formed No More Homeless Pets organization in November 2002. He is a big cat enthusiast and owner. Howard proposed to her in November 2003, and they got hitched in November 2004.

Well, Murdock is a licensed wildlife rehabilitator who manages the sanctuary’s bobcat rehab various program. Also, she is working for Big Cat Rescue as a president for well over ten years. As of 2020, her net worth is around $300 thousand.

In addition, Jamie is a professional photographer who publishes our quarterly newspaper Big Cat Times, delivered to more than 60,000 readers. Meanwhile, she also works in her Dancing Butterfly Arts studio with her husband, Victor.

On the other hand, her mother, Carole Baskin's actual net worth is still under review. But some sources believed to be around $10 Million, which is similar to Peter Morgan. Recently, she got public attention after starring in Netflix documentary series Tiger King, released on March 20, 2020. It is about the life of Oklahoma-based zookeeper Joe Exotic.