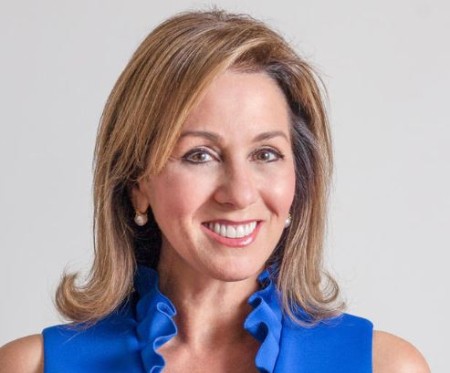 Janet Shamlian is a popular American correspondent, widely known for her appearance as a reporter in the CBS This Morning and CBS Evening News. She is also known as the former correspondent for NBC News.

Shamlian is 57 years as of 2020 as she was born on May 14, 1962, in Oak Park, Illinois. She is the recipient of prestigious awards such as Peabody and several Emmy awards.

The famous correspondent is living a marital life for many years. In 1991, Janet exchanged her wedding vows with her long-term husband, LeRoy Melcher III. The couple has been together for almost 30 years.

After the marriage, LeRoy and his wife, Janet, moved to Chicago. For your information, LeRoy is a businessman and lawyer.

The husband-wife duo shares five children altogether. However, there is no information about their children, neither Janet has revealed anything about them. As a mother of five kids, Janet sometimes finds her job laborious, but she thanks her husband for his invaluable encouragement.

Although the news correspondent and her partner make less public appearances, there is no doubt that the longtime couple has happy marital solidarity.

Began Career as a commencement speaker

Soon after receiving her bachelor's degree in Journalism via Missouri School of Journalism, she served as the commencement speaker at the University.

Later in 2005, Janet joined the NBC and began working as a news reporter. After two years, she interviewed with Michelle Obama, the wife of former American President.

Highlights of her Career

During her days at NBC, Janet has covered some of the interesting interviews and events. Shamlian interviewed Arianne Zucker in October 2016, the actress that Donald Trump made inappropriate comments, in 2005 for a recorded video of Access Hollywood.

The same year, Janet reported live during the Orlando nightclub shooting and from France too. The incident occurred right after the 2016 Nice Attack, where Janet was spending a vacation with her family.

After the NBC, the famous news reporter joined the CBS News in July 2019, where Lisa Villegas also served as a meteorologist. Later, she covered the mass shootings at Gilroy Garlic Festival, California Fires, and the El Paso Walmart.

She has previously reported on national and international NBC incidents, including the oil spill from Deepwater Horizon and Hurricane Katrina. Before NBC and her marital life, Janet served as a reporter at KHOU-TV, KPRC-TV, and more. Catherine Herridge now works as a CBS News senior investigative correspondent, and she was a chief intelligence correspondent for Fox News.

How Much Net Worth does Janet Accumulate?

The correspondent from CBS News has a total net worth of $700,000. She managed to sum up this earning as a reporter. Throughout her two-decades-long career, Janet has worked for several high profile stations.

With a decent amount of wealth, Janet is living a wealthy life, as she is seen spending a vacation at expensive destinations. Moreover, Janet also owns a Labrador dog named Bella.