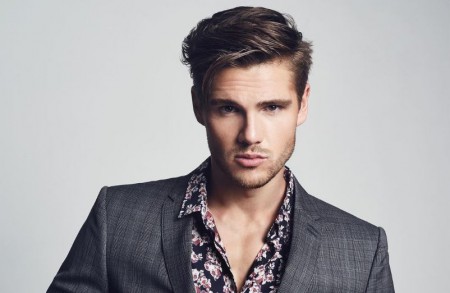 Who is Janis Ostojic?

When it comes to modeling we often pictured beautiful, tall, and sexy females walking in the ramp. However, there are male models who are known for their good looks and has left a mark on the modeling industry. The following column profiles a handsome Belgian model, Janis Ostojic, who has been featured on the Lifetime show 'Growing Up Supermodel.'

The 24-year-old, Janis Ostojic was born on March 30, 1995, in Italy and raised in Belgium. He was born to father Jadranko “JD”, an accomplished model and mother Martine De Ruyter.

His parents first met in Paris and has been happily married since 1992 and they have four beautiful children. For your information, Janis' mother is known as the female Michael Jackson lookalike in Europe.

Janis began modeling from an early age of 5 until 13. But then he focused his career on soccer. After an injury in high school, he again started modeling. At 19, he made it to his nation's highest level, playing in Belgium's first division. Further, his modeling career took off when his mother entered him in a competition in Europe and he won.

Janis has appeared in a few projects such as De Opdracht (2018), Speechless (2016) and Growing Up Supermodel (2017). Also, he has been featured in ads for Versace, Guess, and Bacardi's European campaign. In the Lifetime docuseries, Growing Up Supermodel, he appeared alongside Kelly LeBrock and Arissa LeBrock, among others.

Ever since, Ostojic came into the limelight, fans especially female admirers want to know the love life os Janis. He is a handsome man ripped physique and charming looks. No doubt, many girls might want to date him. But, is he single or is dating anyone? Let's know who is the girlfriend of Janis Ostojic?

Who is the girlfriend of Janis Ostojic?

The 24-year-old, Belgian model, Janis Ostojic is currently dating his girlfriend, Stephanie Marcy. Like, Ostoji, she also works as a model and is signed by the NTA Model Management in Los Angeles.

Janis' girlfriend who is 21 years now seems to be very much in love with him. It is not known where they met or how long they have been dating? But it appears that Janis and Stephanie is dating for over a year.

On January 30, 2019, Janis shared a picture of his girlfriend and praised her for longtime support and love.

As of 2019, Janis Ostojic's net worth and earnings are not available. However, as per assumptions, he might have a net worth of over $500,000. He is currently working with his family on a new line of Jewelry, both men's and women's which would be sold online.

Apart from modeling, Janis is also interested in acting and has appeared in a few television show. He currently takes acting classes and plans to enter in Hollywood. However, in 2018, he appeared in his father's movie called, The Assignment (De Opdracht).

Janis has a collection of several luxury cars such as Mercedes, Chevrolet, among others. He wears expensive designers clothes and accessories.

Being an aspiring model Janis has an intensive workout regime. He has been working out since the age of 15 and lives a healthy lifestyle.