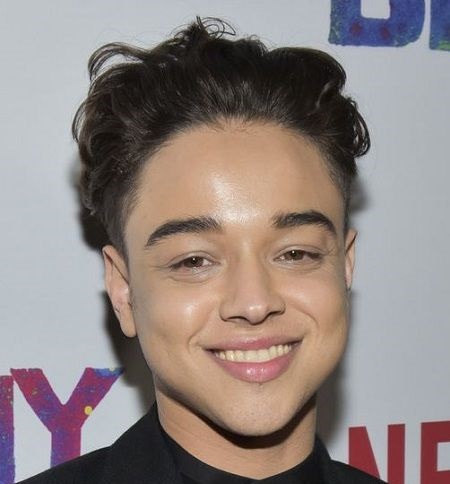 If you are watching the American teen comedy-drama streaming TV series, On My Block on Netflix? Then you might be familiar with the name Jason Genao who portrays the main role of Ruby Martinez.

He is an American actor who has been working in the entertainment industry for four years. Let's talk about his personal life and other information in the following sections.

What is the Relationship Status Of Jason Genao?

Well, Jason who is just 24 years is still an unmarried man. At the current moment, he has not mentioned clearly anything regarding his love life to the media. So there is no exact information whether he has a girlfriend or not.

In fact, his private kinds of stuff mostly remain private or away from the limelight. So far, there is no news that he has been linked romantically with any girls until now.

Therefore, Genao might keep his future relationships away from the public's views. For now, he leads a single life without any dating rumours. Moreover, he is more focused on his upcoming projects and is very serious about it.

What is Jason Genao Net Worth?

The 1.56 m tall, Jason Genao must be earning a good amount of money. As of 2020, he maintains a net value of $400 thousand according to Celebrity Net Worth. He has earned that amount throughout his own career of working as an actor.

Similarly, his salary is valued to be $56,662 which is the average salary of an actor in the United States. In 2017, he played the role of Rictor in superhero film Logan starring Hugh Jackman.

And the film became the third highest-grossing R-rated film of all time earning $619 million worldwide on the budget of $97–127 million.

Stars on Netflix's TV Show On My Block

Teen comedy-drama, On My Block, is created by producer Jeremy Haft, Lauren Iungerich, and Eddie Gonzalez. It was originally released on March 16, 2018, on Netflix. Recently on March 11, 2020, the third season was premiered.

Actor, Jason joined the show playing the main character of Ruben "Ruby" Martinez Jr. from season one in 2018. Ruby means smart-aleck math with the Mexican descent who often serving as the group's conscience. In the series, the stars include Sierra Capri as Monsé Finnie, Julio Macias as Oscar Diaz, Julio Macias as Oscar Diaz Brett Gray as Jamal Turner, and among others.

He made his acting in 2016 playing the small role William Reeves in NBC's TV series, Law & Order: Special Victims Unit. That year, he became the cast of Napoleon in the series The Get Down’ on Netflix. Then after, he played Rictor in superhero film Logan’ in 2017 and also acted as Isaac in a TV show, God Friended Me.

The TV star, Jason Genao was born on July 3, 1996, in New Jersey, United States. Further, he has two brothers named David Genao and Danny Genao. He comes from a Dominican family.

For his higher education, he studied a New Jersey high school. Later, he completes his graduation from William L. Dickinson High School. So far, he holds American citizenship and is of Mixed (White and Hispanic) ethnicity.

For further updates on Actors, stay tuned to Marriedceleb!!!