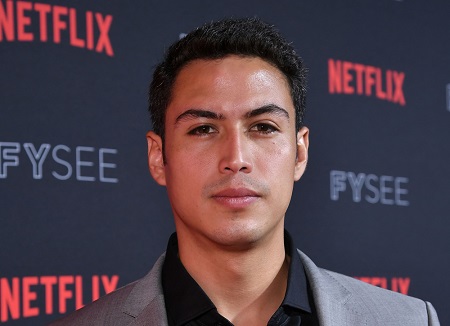 If you are watching the American teen comedy-drama streaming TV series, On My Block on Netflix? Then you might be familiar with the name Julio Macias who portrays the main role of Oscar "Spooky" Diaz.

He is a Mexican–American actor rising actor who has been working in the entertainment industry for four years. Thus he is still struggling hard to pursue a better career. Apart from that, what's going on his personal life? Let's find out.

Who is Julio Macias Married?

The 30 years old Julio has not tied the knot with anyone. So he has no wife at the current moment. However, he has already found his love of life. Now, he is a lovey-dovey love relationship with his girlfriend, Shannon Schotter.

Macias and his girlfriend Shannon has been dating eachother since 2015. That means they are already sparkling their relationship for half-decade. Further, the pair rarely shares each other pictures on their respective social account including Instagram.

The couple further appeared together on On My Block premiere. However, there are rumours of the couple being married on June 15, 2018. But until now they have not made any official announcement.

What is Julio Macias Net Worth?

The 6 feet 1 inch Julio Macias has a net worth of $500 thousand as of 2020. He has accumulated that fortune from his professional acting career. As per The Hollywood Reporter, On My Block's cast members received around $20,000 per episode for the first two seasons.

Similarly, they earn $65,000 per episode for season three which was originally released on March 11, 2020. Thus, for his appearances, we can assume Macias also making the same amount. Further, he has starred in various TV series which helped him to receive a huge amount of fortune.

Macias has been active in the TV industry since 2016. He made his acting debut with the TV mini-series La Vida es Como el cine starring as Poncho in 2014. Then he acted as Canz in Game Shakers season 1, episode 18.

However, he gained worldwide fame when he joined the television series On My Block in 2018. He plays the main role of Oscar "Spooky" Diaz in season 3 and recurring seasons 1 and 2. It was originally released on March 16, 2018, on Netflix.

The show's main cast members are Sierra Capri, Ronni Hawk, Diego Tinoco, Jessica Marie Garcia, Troy Leigh-Anne Johnson, and Jason Genao. The series' third season premiered on March 11, 2020. Apart from the show, she has made appearances in several films and television series such as Jane the Virgin, S.W.A.T., Blazed to the Future, etc.

His upcoming TV series is Selena: The Series. He is playing as Pete Astudillo.

The TV actor, Julio was born on March 20, 1990, in Mexico City, Mexico as Julio Arturo Macias. He is the son of a mother, Aida Lourdes Macias while his fathers' name is not known. When he was a child, he moved to the United States with his family.

As per his citizenship, he is American-Mexican and is of Latin, Caucasian ethnicity. So far, he is a graduated of East Aurora High School Class in 2010.