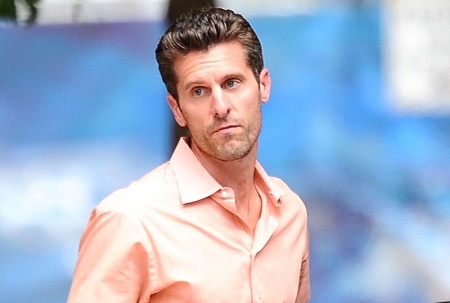 Јаѕоn Норру іѕ аn American ѕuссеѕѕful еntrерrеnеur who rose to the limelight as the ex-husband of ‘Real Housewives of New York’ star, Bethenny Frankel. He has also made his TV debut on Franke's spin-off reality Bravo shows Bethenny Ever After, and Bethenny Getting Married?. Before that, he used to work as a Pharmaceutical account executive at АbbVіе.

He was born on September 10, 1970, in New York City, NY to the parent's Carol A. Hoppy, and Robert M. Hoppy. Further, he had one late brother Bryan Hoppy who died in February 1991 at a young age. He holds American citizenship and belongs to the white ethnicity. So far, he is a graduate of the University of Scranton.

How Long Hoppy Was Married to Bethenny?

The 49 years old businessman was in a marital relationship with American TV personality Bethenny Frankel for around six years. The two first met eachother at a New York's meatpacking district nightclub Tenjune in October of 2008.

After two years of love romance, the lovebirds exchanged the wedding vows on March 29, 2010, at the Four Seasons of Bethenny’s Getting Married? in Manhattan. Their marriage function was held among their family and friends including Simon van Kempen and Alex McCord.

Within a month, Jason and her now estranged wife welcomed their first child or daughter Bryn Hoppy on May 10, 2010. They were together until 2016 when their divorce was finalized. Before marrying Jason, the Bravo star was once married to Peter Sussman, an entertainment industry executive from 1996 to 1997.

The Ugly Divorce and Custody Fight over Their Daughter Bryn

In December 2012, the 1.85 m tall Jason and the 1.7 m tall Bethenny called its quits and filed a petition for divorce in January 2013. In June 2014, a custody deal was completed. And also they ended their marriage in July 2016, about four years after the pair split.

Since the split, the ex-lovers have been fighting a bitter 18-month fight for their daughter's custody. Fortunately, they settled in June 2014 on Bryn 's joint custody agreement, resolving one of their divorce's most hurtful pieces.

But later Jason was arrested in Jan 2017, in the middle of an unplanned visit to Bryn 's school, for allegedly threatening Frankel. Hoppy disputed her accusations of abuse, telling Us in 2017 via his lawyer that "his daughter is his primary concern."

In December 2017, nearly a year after Jason's arrest, the reality television star sued for their daughter's full custody. Today, the status of the custody trial is still not known to the public.

As of early June 2020, Jason Hoppy has an impressive net worth of of $5 million. He has earned his total fortune as a New York City real estate agent and reality television star. He previously also spent time as a representative for ABBvie's pharmaceutical sales. So from there he might have earned a few amount of money as well.

On the other hand, his ex-partner, Bethenny Frankel enjoys the net value of $70 million. She made this amount from her various stints on reality television and as the founder and CEO of Skinnygirl cocktail company. She bought her line of cocktails for $120 million. But in 2011, she sold it for $100 million to Beam Global.