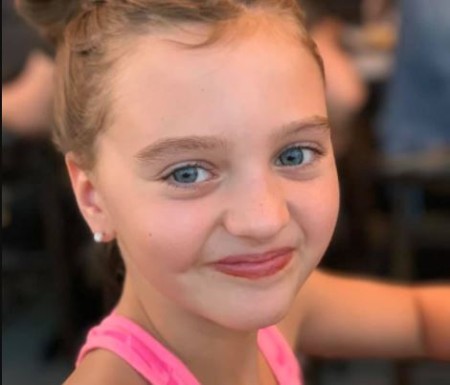 Jaymeson Sweeten, also known as Jaymeson Gini, is famous as the half-sister of Madylin Sweeten and identical brothers, Sullivan and Sawyer. All three siblings appeared on the CBS sitcom, Everybody Loves Raymond. Unfortunately, Sawyer died by committing suicide at age 19.

In the show, Everybody Loves Raymond, Sawyer and his brother portrayed the role of Geoffrey and Michael Barone, while Madiyln appeared as their older sister, Alexandra. But today we will get to know the youngest Sweeten celebrity kid, Jaymeson and her family.

Jaymeson is among the five children born to Elizabeth Millsap Gini and her second husband, Jerry Gini. Her parents married in October 2008, and they renewed their vows again in 2017. They have been together for over 12 years as of 2020.

Elizabeth was previously married to Timothy Lynn Sweeten, with whom she had two daughters, Madylin and Maysa along with two sons, Sawyer and Sullivan Sweeten. After welcoming their fourth child, the couple divorced each other.

The exact reason for their separation is unknown. After divorcing Elizabeth, Timothy married Nina K. Boaz, and they reside in Texas. Further, he works at Vernor Material & Equipment Co., Inc.

Jaymeson's net worth details are unavailable as she is too young to get involved in any profession. She enjoys her parent's earnings at the moment. Jaymeson is currently focusing on her academics. Perhaps she will also follow her career in the future, behaving like her other half brother and sister.

Talking about her half-siblings, Sawyer, Sullivan and Madylin earned a hefty sum of money from appearing in Everybody Loves Raymond for nine seasons. Additionally, Sawyer and Sullivan even had a lovely villa.

Her Half-Sister Madylin is a Millionaire

The 29-year-old, Madylin Sweeten is a millionaire having a net worth of $5 million as of 2020. She collected an impressive amount of wealth from her long acting career. Madylin has appeared in several commercials and won the prestigious children's pageant title of World's Universal Beauty.

Madylin has appeared in some of the successful tv shows like Grey's Anatomy along with Jesse Johnson and Katherine Heigl. Likewise, she has appeared in Netflix's Lucifer, where actress Inbar Lavi also appeared.

When the 19-year-old celebrity teenager, Sawyer Sweeten took his own life no one could really think why he did that. He committed suicide on April 23, 2015, by shooting himself on the head.

Sawyer's mom, Elizabeth, told that the loss of her son was the most painful thing that ever happened to her. She revealed that she noticed her son's mental breakdowns, but as Sawyer was living separately, she couldn't spend much time with him.