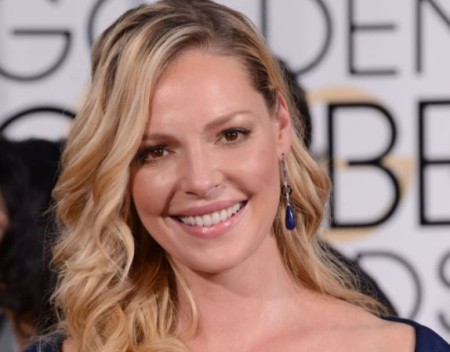 Today we will be talking about an actress who went from fans beloved star to Hollywood's notorious celebrity. You might have seen ABC's medical drama, Grey's Anatomy, one of tv's highest-rated series. Katherine Heigl's fame rose to a whole new level when she began appearing as Izzie Stevens, a role for which she won a Primetime Emmy Award. So, what happened to her, and is she still acting on films and television? Stay till the end!

Katherine is an American actress and former model who began her career as a child model. She then became popular with television series, Roswell, Grey's Anatomy, etc. Some of her movies include Knocked Up, 27 Dresses, The Ugly Truth, Killer, etc.

Katherine Marie Heigl was born on November 24, 1978, in Washington, D.C., the United States. The 41-year-old actress is the youngest of four children born to parents, Nancy Engelhardt (mother) and Paul Heigl (father). Her mother works as a personal manager while her father is a financial executive and accountant.

Heigl has siblings, Meg (adopted) and Holt, while her older Jason died in a car accident. After their son passed away, Paul and Nancy covert to The Church of Jesus Christ of Latter-day Saints. Katherine has a mixed ancestry of German and Irish. She dropped out of New Canaan High School to pursue her career in Hollywood.

Jenny's Wedding actress, Katherine, is a married woman, and her husband is a renowned singer/songwriter, Josh Kelley. They first met in 2005 when Heigl appeared in Josh's music video for Only You. A year later, they became engaged in June 2006.

Talking about Heigl's spouse, Josh Kelley, as a pop-rock artist, has worked with Hollywood Records, Threshold Records, and DNK Records. On the occasion of their 12th anniversary, Heigl wrote a sweet message to her partner praising for his unconditional love and support.

Kathrine and Josh share two adopted and one biological child. They first adopted a South Korean baby girl in 2009. The couple named her Nancy Leigh (Naleigh), after Katherine's mom and her Korean-born older sister. Naleigh was born with a congenital heart defect, but she had open-heart surgery before leaving South Korea.

In 2012, Heigl and Kelley adopted second daughter Adalaide Marie Hope from America. The couple's only biological son, Joshua Bishop, was born in December 2016.

Katherine Heigl has a reported net worth of $30 million as per celebrity net worth. The secret to her impressive fortune is her professional acting career. But do you know her salary for the 2007 film, Knocked Up, was $300,000?

Heigl's salary per episode in Grey's Anatomy was around $125,000 in the beginning, which later increased to $300,000. Her co-stars from the show, such as Gaius Charles and Martin Henderson has decent wealth. Before looking upon her incomes, let's have a look at some of her commercially successful movies.

After gaining critical and commercial accolades, Heigl received a paycheck of $6 million for the 2008 film, 27 Dresses. In 2010, Katherine starred in two movies, Killers and Life as We Know It, for which she earned $12 million for both movies. For the 2012 film One for the Money, Heigl earned a career-high $15 million. There is no doubt that she lives a extravagant lifestyle.

Heigl also owned a smaller Los Feliz home, which she paid for $1.5 million in 2006. The 2,400 sqft house included 3 bedrooms, 1.5 bathrooms, and the glass walls that provide views from downtown to the ocean. Heigl listed the house for sale in 2008 for $1.75 million.

Not only is she a talented actress, but Heigl is a woman with a golden heart. She actively participates in several charity and foundations. Heigl established the Jason Debus Heigl Foundation in honor of her late brother. The actress, along with her mom, Nancy, started Heigl's Hounds of Hope.

Heigl is a spokesperson for Donate Life America and works as an activist for organ donation. For her charity works, several organizations has honored Heigl. IN 2010, she received the Presidential Service Award for her work on animal welfare. In 2012, the American Cancer Society recognized her work for raising awareness on cancer-related issues.

Throughout her career, Katherine has won several awards and nominations. She first won two Camie Awards in 2003 and 2005 for starring in tv films, Love Comes Softly and Love's Enduring Promise.

Her most notable work in Grey's Anatomy earned her an Emmy Award in 2007. For the same series, Heigl received Screen Actors Guild Awards in 2006 and People's Choice Awards in 2008 and 2010. Additionally, Katherine has been nominated for Golden Globe, Satellite Awards, among others.

Was Heigl fired from Grey's Anatomy?

Heigl earned wide praise for her role as Dr. Izzie Stevens on the ABC hit series, Grey's Anatomy. She found greater success for six seasons.  In 2007 Heigl won an Emmy, but in 2008 she withdrew her name from being nominated.

Katherine had a different opinion about her character, which didn't go well with the show's creator, Shonda Rhimes. As per Entertainment Weekly, Heigl said:

“I did not feel that I was given the material this season to warrant an Emmy nomination and in an effort to maintain the integrity of the academy organization, I withdrew my name from contention."

In March 2010, Heigl didn't show up for work, and Rhimes immediately terminated her contract. Although the actress later appeared in movies and other television shows, she once expressed her regret leaving the show. In an interview with Howard Stern, Heigl stated that she apologized to Shonda about her comments on the character.

Since 2010, Katherine has appeared in several films and television shows. She appeared in USA Network's highly popular series, Suits, along with Sarah Rafferty. In 2020, she appeared in the Netflix series, Firefly Lane.