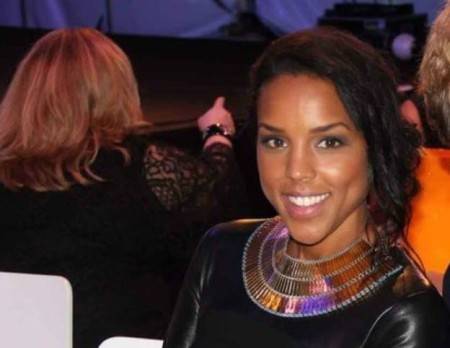 American businesswoman, Jessica Olsson is the associate director of a non-profit organization, Goss-Michael Foundation Art Gallery, situated in Dallas, Texas. She is also the wife of Dirk Nowitzki, who's a former German professional basketball player and the power forward for the Dallas Mavericks as well as Milwaukee Bucks. Olsson's husband is also a 14-time All-Star and 12-time All-NBA member who received the NBA Most Valuable Player Award.

Olsson was born in 1981 in Gavle, Sweden, and hails from a mixed ethnic background (Kenyan and Swedish). She spent her childhood with her two twin brothers. If you are looking for more information about Olsson's personal life, then read the article to the end.

The 38-year-old businesswoman, Jessica, and her beloved husband, Dirk Nowitzki are committed to a blissful marital relationship. The two walked down the wedding aisle on 20th July 2012 in Preston Hollow, a neighborhood in Dallas, Texas.

During the time of their wedding ceremony, the bride was dressed in a spaghetti straps ball with elegant lace tulle gown. On the other hand, the groom donned a dark grey tuxedo, tying with a dark blue tie and a flower on his left pocket. After their marriage, they went on a romantic honeymoon in the southern part of the Caribbean Sea.

The couple met for the first time at a charity function, carried out to deliver sports education and economic development project in 2010. At that time, they shortly interacted for a moment, but later they began dating. Fortunately, they later found their hobbies and interests are also the same so that they got engaged afterward. Since then, the couple is maintaining a strong bond in their relationship.

Jessica and Nowitzki are blessed with three adorable kids. At first, they welcomed a beautiful daughter, Malaika Nowitzki (born in July 2013). Furthermore, she is now six years old and enrolls in a junior school.

The couple later welcomed their second child, Max Nowitzki in March 2015. Once again, they proclaimed that they're going to welcome their third child, Morris Nowitzki on November 2016.

Olsson's husband, Dirk dated an American female basketball player, Sybille Gerer, who played for the DJK Wurzburg. The two first met in 2010 and shortly began dating after having a sweet conversation.

The couple stayed into a joyful relationship for more than ten years, but later, they separated due to some misunderstandings. In an interview, Dirk gave his statement against Sybille where he said,

"At the end, we found out we developed in separate ways. ... It did not work anymore, but we are still good friends."

Nowitzki further added some other words,

"I surely want to start a family and have kids, but I cannot imagine it happening before I become 30."

Jessica Olsson has a net worth of $150 Thousand as of 2019. She earns a handsome remuneration from her profession. Similarly, the average income of an associate director is $87,145 in the United States, reported by Indeed. So, her salary might be in a similar range.

Olsson's husband, Dirk has a net worth of $140 Million and earns an average payroll of $5 Million annually from his contract with Dallas Mavericks. He made total earnings of $251,646,362 from 21 seasons throughout his NBA career. Likewise, Alvin Williams and Jeffrey Michael Jordan are also earning a lucrative fortune from their cap hits.

Jessica and her husband, Nowitzki are living a luxurious life in their lavish accommodation located in Dallas, Texas. They bought their house for $5.75 Million from the late Dallas-based billionaire, Charles Wyly. As of now, the price of their residence is listed at $8.25 Million.

Their rooftop was built in 1939, which consists of 10 bedrooms, nine and a half bathrooms on 11,394 square feet. Their house also features a fully designated kitchen, an elevator that goes upto terrace, and a diamond-shaped pool in the backside of the residence.

Jessica's husband, Dirk's biography is shown in the book of Dirk Nowitzki: German Wunderkind, which was written by Dino Reisner and Holger Sauer in 2004. Currently, the price of the book is $120.62, which consists of 4 used and new editions.

In a similar way, Reisner also published numerous books about Dirk's novelist. On 15th September 2017, he wrote a book, Dirk Nowitzki: The German Giant, that prizes $42.65 in hardcover that includes 11 used ($19.73) and eight new ($22.92). Moreover, there are some other books related to Nowitzki's professional career, including Nowitzki: The Perfect Shot, The Soul of Basketball, and many others.