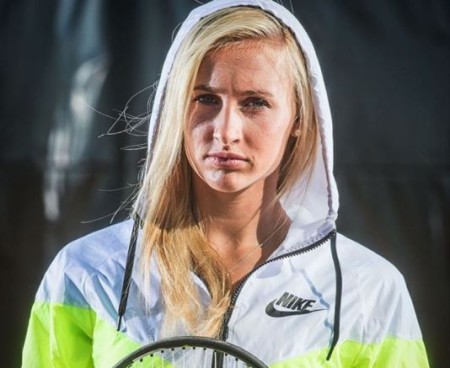 Jil Teichmann is a Spanish professional tennis player who plays for Switzerland. She has won several championships and has played in Summer Youth Olympics, US Open, WTA, etc.

In 2020, Jil won the Prague Open in the Czech Republic and Palermo International in Italy. However, she lost the Top Seed Open to her opponent, Jennifer Brady, in August 2020.

The 23-year-old tennis player is currently single, which means she doesn't have a boyfriend. Jil has been an ambitious and hardworking girl since her young age. Hence, she prefers to build her professional career rather than spending time on romantic affairs.

In her leisure time, Teichmann likes to travel, workout in the gym, and try adventurous stuff. She is a fun-loving and outgoing personality. She spends time with her friends and families. Her favorite country is Italy, and she often travels to different exotic places.

Outside the court, Jil makes a hefty sum of money from sponsorships and endorsements. Lacoste and Nike currently sponsor the Swiss player. Additionally, Jil appears on photoshoots as well. Recently, WTA Linz gifted her a beautiful Porsche.

Most players become active in business, aside from their sports careers. Likewise, Jil might also launch her own merchandise in the coming future. For your information, Serena Williams is still the wealthiest female tennis player as of 2020.

In 2014, Jil won the gold medal at Junior Olympics, while in the junior grand slam finals, she won the girls' doubles (US Open). Further, she has won five singles and five doubles titles on the ITF Women's Circuit.

Watch Jil Teichmann vs. Aliona Bolsova in the US Open 2020!

Teichmann won her first WTA singles title after winning the Prague Open in May 2019. The win registered her first Top 100 in the WTA rankings.

Jil Belen Teichmann was born on July 15, 1997, in Barcelona, Spain. Her parents, Jacques (father) and Regula Teichmann (mother), were members of a tennis club in Barcelona.

Jil grew up in Catalonia, Spain, until 14 and later moved to Switzerland with her family. She can speak five languages: German, Spanish, Catalan, French, and English. Further, Jil has a younger brother, Raul Teichmann (b: April 1999), who plays tennis for Cleveland State.