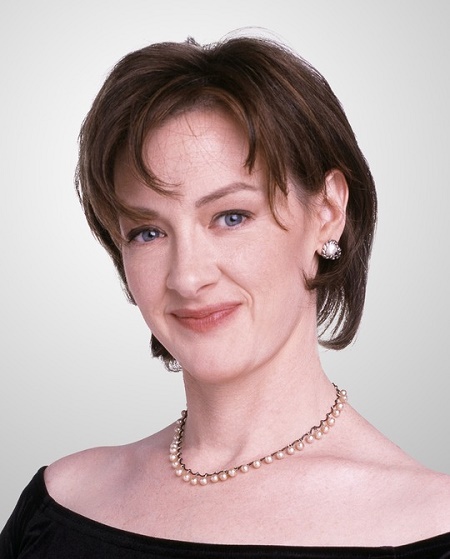 Comedic American actress Joan Cusack is widely famous for her roles in both romantic comedy films In & Out (1997), and Working Girl (1988). Also, she is known for starring in hit drama in as Sheila Jackson, for which she has earned five consecutive Primetime Emmy Award nominations.

Joan Mary Cusack was born on October 11, 1962, in New York City, New York, USA. She is the daughter of Nancy, a retired math teacher and late Dick Cusack (1925–2003), an advertising director, writer, executive. She further has four siblings named Susie Cusack, John Cusack, a famous actor, Ann Cusack, an actress, and Bill Cusack. As per her citizenship, she is American and is of mixed ethnicity.

Who is Joan Cusack Married to?

The 57 years old Joan is married to her long term husband beloved, Richard Burke. He is an attorney who works as a President, and CEO of Envoy Global, Inc.

Cusack and Burker tied the knot in the year 1996. The couple had a private wedding ceremony in the presence of their family members and friends. Since their big day, they have been sharing a strong and healthy marital relationship for about 24 years.

In fact, after her marriage in 1996, the actress quickly took a break from Hollywood to concentrate on her family. Today, despite their lengthy-term marriage, they still have immense respect for each other, as they have never been involved in any conflict or disagreement.

Joan who gave the voice of cowgirl Jessie in Toy Story 2, 3, and 4 is a proud mother of two kids. She and her husband Richard have two grown sons named Dylan John Burke and Miles Burke.

Dylan is the firstborn child who was born on 17 June 1997. While their youngest one is Miles who was born in July 2000. Since becoming a mom or first time in 1997, she has shared details of her family life in Chicago during numerous interviews. She once stated;

"It prevents our family life from revolving around the TV and the movies. In L.A. it's easy to get caught up in what you look like or how much money you have, and those aren't values I want my kids to adopt."

Cusack, who's 1.75 m tall, said her two kids are loving Chicago's restaurants, galleries, and design. She's even in love with Chicago because it keeps her children tied down, said in the interview. Currently, the whole family resides in their own home in Chicago, Illinois.

Since beginning her acting as a teenager, Joan has achieved a lot of fortune as an actor in Hollywood. Thus, from her four decades of acting and voice acting work, she also received a considerable amount of fortune. As of early 2020, she has a whopping net worth of $8 Million which is alike to Tom Hanks.

Since the early 80s, Joan has acted in various hit films and TV series. Thus, for her appearances, she earns a salary of about $91401 a year. Likewise, her successful film Toy Story 2 made $497.4 million against the budget of $90 million.