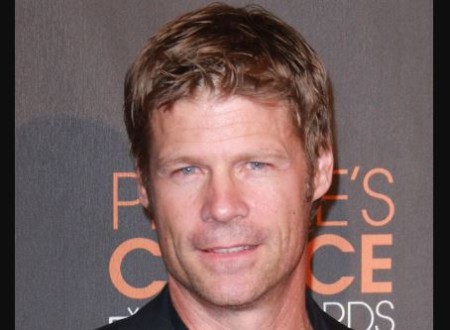 An American actor, Joel Gretsch, is best known for playing the lead role of Tom Baldwin for a TV show, The 4400. Additionally, he is known for his appearances as Col. Owen Crawford in Taken (2002) and Father Jack Landry in V.

Joel James Gretsch was born on December 20, 1963, in St. Cloud, Minnesota, USA, to the parents Russ and Barb Gretsch. Moreover, he has two siblings, named Jane and Steve. Likewise, he belongs to the white ethnicity and holds American citizenship.

Who is Joel Gretsch's Wife?

Joel's spouse is none other than Melanie Shatner, daughter of renowned actor and director, William Shatner, and his first wife, Gloria Rand. Well, she is an actress who played the major professional role of Becky Morgan in the film series named Subspecies.

Gretsch (56) and his wife, Melanie (55), tied their wedding knot on September 5, 1999, at an intimate ceremony. Since the day, the long term married duo have been living a happy life together for two decades. So far, there are no rumors of their extramarital affairs to the media.

The 1.79m tall actor is the father of two children whom he shares with actress, Melanie. They gave birth to their firstborn daughter named Kaya Gretsch in 2002. As of now, she is 18 years old.

Born in 2005, Willow Gretsch is the youngest child of Hollywood couple, Joel James and Shatner. She is 15 years old currently. Though they kept their babies away from the limelight, they must undoubtedly be parenting their kids well.

Net Worth and Salary of Joel Gretsch

Joel Gretsch, actor, and director has an estimated net worth of $3 Million, which is similar to another American actress, Beth Broderick. He made this fortune through her successful acting and directing for various TV shows and films.

The average United States actor salary as of 2020 is $57,001, although the amount usually ranges between $46,901 and $69,501. And, looking at his hard work, acting skills, his earnings are in the same amount. On the other hand, his wife Melanie shares $1 Million worth as an actress.

Joel James Gretsch is a known actor who is remembered for his excellent roles in several films and series. His appearances on television include JAG, Silk Stalkings, CSI: Miami, Burn Notice, Law & Order: Criminal Intent, The Client List, and others.

Furthermore, Gretsch has worked in a number of films, including The Legend of Bagger Vance, Minority Report, The Emperor's Club, Saving Grace B. Jones, Push, etc. Reilly Dolman also featured in the movie Zodiac: Signs of The Apocalypse.

Recently, in the last two episodes of the 1st season, produced by Diablo Cody, he appeared in the new Diablo Cody created Emmy Award-winning Showtime Comedy-Drama The United States of Tara.