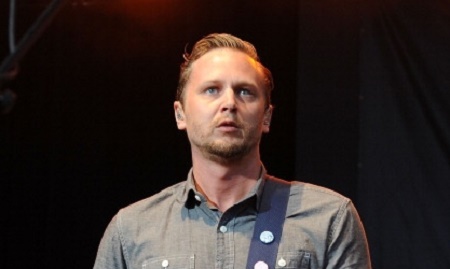 American musician, Jon Siebels is the best known as the lead guitarist of the band Eve 6. Rock guitarist and band member of Eve 6 is known for songs such as Inside Out, Here's to the Night and among others. In addition, Jon has been associated with David Letterman's show as a musical guest.

Eve 6's star, Jon Siebels was born on 27th  August 1979 in the United States of America as Jonathan Lee Siebels. As of 2019, she is 40 years old. Further, he was raised by his very supportive parents in the Los Angeles area, but the details regarding his early life, siblings, parents and as well as education aren't disclosed to the media. As per Siebels' citizenship, he is American, whereas ethnicity is white.

Since the early days, Jon was interested in the music so later he started performing in different releases and tracks. Then he became part of the group after meeting bassist and lead vocalist Max Collins at Crescenta Valley High School. Likewise, his first band was Monsters Are Waiting which played shows in the Los Angeles area. But, later Siebels and other band members left the group.

In 2010, Siebels performed on and co-wrote Hesta Prynn's solo debut EP Can We Go Wrong. He is best known as the guitarist of the band Eve 6, but in 2004 he left. Happily, Jon returned to the band Eve 6 in the year 2011. Some of his songs are Victoria, Blood Brothers, Lion's Den, Curtain, Situation Infatuation, Red and Black and among others.

This good looking Rock guitarist, Jon Siebels was in a romantic love relationship in the past with his former girlfriend, Emily Rebecca Kinney.  After being in love connection for a few months, they later separated, but the actual reason behind their split is not known to the media.

Well, the former lovebirds dated eachother until the year 2012. Moreover, his former girlfriend Rebecca is now a romantic relationship with her new beau, Paul McDonald.

After the seperation with Emily, Jon Siebels is living a single life. Therefore, the current status of Jon's relationship is likely to be single and unmarried.

Jon often shares photos with his male and female colleagues through his Instagram profile. But there is no such post that reflects as he has a girlfriend. It's very difficult to tell whether he's dating her girlfriend or not at the time because of his secretive nature.  As of now, he is enjoying his singlehood.

Rock guitarist and member of the band Eve 6, Jon Siebels earns a good amount of money from his profession. However, Siebels's actual net worth is still under review. But analyzing his work, it is expected to be around $850k to 900k as of 2019.

Well, the significant way of earnings is his musical career so all credit goes to his long-time career. Hence, he is widely identified for his music career only. However, Jon 's annual salary is under review. As per some sources, the average salary for a Musician is $43,005 per annum in the United States.

Other than this, there are no details about his house, car and other properties.