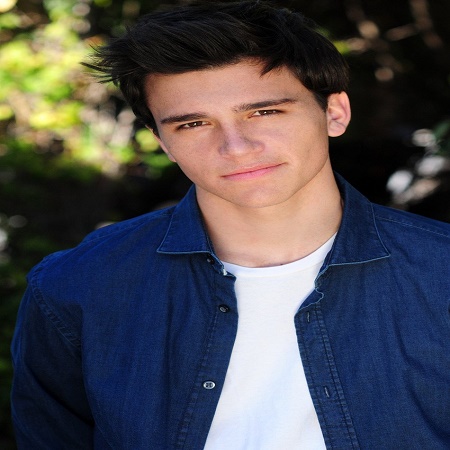 Kalama Epstein is an American actress and director. He is best known for his recurring role as Noah on Freeform's The Fosters and as Kyle in Nickelodeon's Bella and the Bulldogs. In addition, he is also famous for his starring roles in the Nickelodeon show Deadtime Stories and Netflix's No Good Nick.

The versatile actor Epstein is not married but he is in a blissful relationship with his girlfriend, Daniela Leon.

Epstein was born on 5th May 2000. in Oahu, Hawaii, United States. He is the youngest child of Kendra Porter Epstein(Mother) and Dan Epstein(Father).

In addition, he has two elder sisters Dallas Epstein and Kulani Epstein. Epstein holds American citizenship and is of white ethnicity.

Epstein completed his High School from a private school in Oahu. He started acting and modeling since his childhood. At the age of 7, Epstein decided to become a director. In 2018, he wrote, directed, and edited a short movie, Silence. Furthermore, he also starred in the movie.

Till date, Kalama has appeared in popular TV shows such as Red Carpet Report, Piper's Picks TV, Piper's QUICK Picks, Hollywood Today Live. In addition, he was the part of TV shows including Maker Shack Agency, Crazy Ex-Girlfriend, Bella and the Bulldogs, Dog with a Blog, The Fosters and  Deadtime Stories. Moreover, Kalama played the main role in the 2013 short drama, The Kid.

He also collaborated and shared the red carpet with Hollywood stars like, Dove Cameron, Hayden Byerly, Siena Agudong, Melissa Joan Hart and many other.

The 19 years old actor Epstein's fans are wondering whether he is single or already taken. Well, for your kind information, The Fosters' star Epstein has a blissful relationship with his girlfriend Daniela Leon.

As per Daniela's Instagram, the two seems to be in touch with each other since 2014. Epstein once shared a picture on his Instagram and captioned:

In fact, Kalama and his girlfriend do not hesitate to share their pictures via their respective social sites. By profession, Epstein's girlfriend is an actress and dancer who appeared as a guest on Dancing with the Stars at the age of 8.

The lovebirds share very good chemistry and they are open about their love life.

Also, on 2018 October, the duo celebrated their two years of dating anniversary. Also, Epstein shared a lovely picture on the occasion of his lover's birthday on 12th June 2018. Well, they are happy to be with each other and are supportive too.

Gay Character On The Fosters

Epstein played a gay character in The Fosters so, some people suspected him to be gay. He never talked about his sexuality during his time on The Fosters. However, all the rumors turned out to be fake as he is currently dating his girlfriend Daniela.

In an interview, Epstein was asked about what makes him happy. He said the following:

"My friends. My girlfriend. My family. Also, film. Television,"

An American actor and director, Kalama Epstein's net worth is $300,000 as of 2019. The main source of his income is from acting. So far, Epstein has not yet disclosed his actual salary. As per some sources, the average wage of an actor in America is $22,913, and thus, his remuneration is also pretended to be in the same range. Besides, he also worked in many national commercials.

Likewise, Epstein starred in the TV show The Fosters. In the show, he shared the screen along with Maia Mitchell, Cierra Ramirez, David Lambert, Travis Bryant, and others. His co-star Miah has a net worth of $3 million as of 2019.