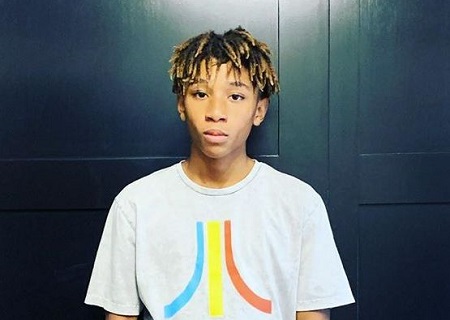 Being born to a reputed family always gives oneself a lot more fame and opportunities ahead in life. Kasseem Dean, Jr. aka KJ AKA was born with a golden spoon in his mouth. He is widely famous as the single son of American hip-hop artist, Swizz Beatz and his first wife, Mashonda Tifrere, an American singer.

The celebrity child was born on December 22, 2006, in the United States of America. Further, he has four half-siblings named Prince Nasir Dean, 19, Genesis Ali Dean, 5, Egypt Daoud Dean, 9, and Nicole Dean from his dad's side. As per his citizenship, he is American and is of mixed ethnicity.

His Parents' Are Now Divorced Couple

Kasseem who has celebrated his 13th birthday in the last year 2018 is still young to engage in any love affair. Meanwhile, he enjoys his childhood along with his family and is also focused on studies and career.

On the other hand, his parents Mashonda, and Swizz were in a conjual relationship for almost six years. The twosome who began dating in 1998 tied the knot on in the year 2004. But before marriage, Tifrere, 42, had a miscarriage in 2000.

During that period, the musicians had one son Kasseem Dean, Jr., born in 2006. Unfortunately, they announced their break up citing irreconcilable differences in June 2008 after 4 years of marriage.

In May 2010, their divorce was finalized. The Boston-based Mashonda said that Beatz had an extramarital affair with his current wife Alicia Keys while he was still married to her. But now, Mashonda is very close to Alicia.

In addition, the R&B singer also shares a daughter Nicole Dean with UK-based singer Jahna Sabastian, 33. They first met in 2007 and dated for a while. Also, he shares one son Prince Dean with his former girlfriend, Nicole Levy.

His Dad, Swizz Is Remarried To American musician, Alicia Keys

Since the divorce, his mother, Mashonda, 42, remains single while his dad, Kasseem Dean got remarried. He got hitched with a 15-time Grammy Award-winning artist, Alicia Augello-Cook Dean, better known by her stage name Alicia Keys.

The couple who began dating in 2008 exchanged the wedding vows on July 31, 2010, in a private ceremony. For their big day, the choose their private home on the Mediterranean Sea in Italy.

The bride Keys stunned in a beautiful white gown by Vera Wang while the groom wore a tux with a white suit by Tom Ford. In fact, 39, Alicia was pregnant with their first child during their marriage ceremony.

The two musician duo who have celebrated their 20th marriage anniversary is enjoying their parenthood of two little kids. They are Egypt Daoud (born in 2010) and Genesis Ali (born in 2014). Now, the whole family resides in Manhattan.

How Rich is Kasseem?

Dean, Jr. is stepping up his own musical career as of now. He was filmed along with his dad while listening to the playback of 'Take Your Time, which was loved by everyone. Even, he frequently performs at various concerts today. But his profits and revenues are still under investigation.

On the other hand, his mother, Mashonda Tifrere has a net worth of $5 million as of 2020. The R&B singer has amassed her wealth from her own career of working as a singer. While his dad, Swizz shares a staggering combine net worth of $150 million with Alicia. Likewise, the hip hop artist, composer, and record producer, Beatz has earned an overall $145 million over his career.