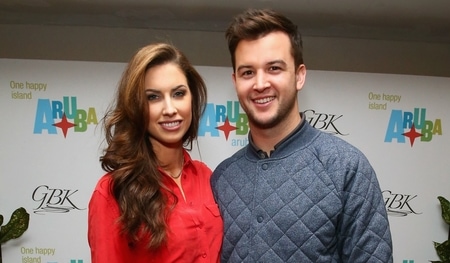 In 2013, after appearing in BCS National Championship Game, Katherine Webb went viral. Not just game commentators but fans all over Twitter found the new crush on her. Webb former Miss Alabama USA 2012 grabbed the headlines, and the very next day, her relationship and personal life became a topic of interest.

As of now, she is a married woman. Katherine tied the knot with AJ McCarron, and the fans call them Romeo and Juliet of Alabama. Did you know? A couple of fans were against Webb and McCarron's nuptials. Now, let's know more about their wedding ceremony and their married life.

Love Between the Rivalries

Webb says Football is religion in Alabama. The game is a top priority among the people, and in the state, Auburn and Alabama rivalry is one of the biggest college football rivalries. After graduating from Auburn, Katherine found love in AJ, who played for Alabama University.

It's a huge deal. The fans at first did not like this crossover. Their dating life became a national headline. The couple started dating in 2013 but their love life only went viral after Webb appeared in BCS National Championship supporting McCarron. Brent Musburger, a commentator for the match, even called her a lovely lady and beautiful.

A Diamond Ring Proposal and Wedding

As their love life went so viral, many people had a lot to say. Some even didn't want them to get married, but most did. After a year of dating, the couple became the ideal pair in Alabama.

At the Beach Club in Gulf Shores, Alabama, AJ asked her the big question. McCarron went on his one knee and took out a five-carat Cushion-cut center diamond ring and said, 'Will you marry me?'.

Katherine said Yes, and their loved ones joined them for their engagement. At the party, they ordered a cake that featured a recreation of her Miss Alabama US sash and AJ's football helmet. The duo walked down the aisle on July 12, 2014, in an intimate ceremony.

More Details on the Ceremony

The pair exchanged wedding vows at the Orange Beach United Methodist Church. Webb walked down the aisle with her father in her beautiful strapless wedding gown.

Ten bridesmaids and ten groomsmen surrounded the bride and groom. After the Reverand pronounced them husband and wife, the duo kissed each other while saying, 'I Love You.'

The duo also booked a fantastic venue for their reception. All the guests partied all night while feeding on delicious foods. AJ and Webb posed for photos along with their friends.

Webb is now a Mother of Two

Leading into the year 2016, Webb gave birth to Tripp McCarron on May 24, 2016. The duo loves to share pictures of them with their son on Instagram. After seven months after they celebrated Tripp's second birthday, Katherine became a mom for the second time.

In December 2018, the couple welcomed another member into their family. Webb announced the birth of Cash Carter via her Instagram. In the video, AJ is seen holding Cash and kissing him.

As of now, the duo is living a blissful married life with their family without any rumors of separation. Webb's now a celebrity wife and supports her spouse like other celebrity wives, Raina Patricia and Jennifer Ashley Harper, to name a few.