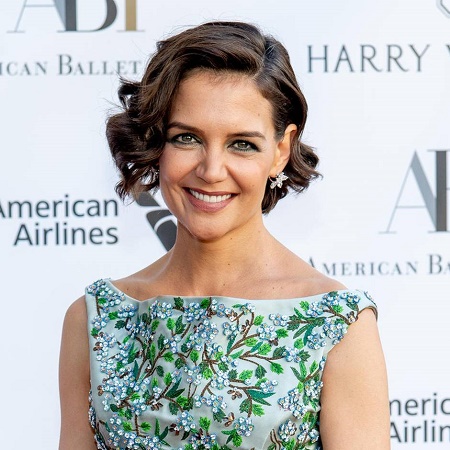 Katie Holmes is an American famous actress, model, director, and producer. However, she gained worldwide notoriety initially after starring as leading role Joey Potter on the TV series Dawson's Creek (1998–2003) in all 128 episodes. Her film credits are Teaching Mrs. Tingle (1999), Abandon (2002), Jack and Jill (2011), Logan Lucky (2017), and among others.

Katherine Noelle Holmes was born on December 18, 1978, in Toledo, Ohio, United Staes. She is the youngest kid of American attorney Martin Joseph Holmes and Kathleen Holmes, a philanthropist. She has two four older siblings Tamera, Holly, and Nancy and Martin Joseph Holmes, Jr. She holds an American nationality and is of White ethnicity

Yes, the 1.75 m tall director was previously married to one of the highest-paid actors in the world. He is one other than Tom Cruise who is a renowned actor and producer in the film industry.

The lovebirds made their relationship public in April 2005 in Rome. Then shortly, they became engaged in June 2005, only seven weeks after the meeting. Then they welcomed their daughter Suri Cruise on 18 April 2006 on the same date of their first anniversary.

On November 18, 2006, they tied the knot at the 15th-century Odescalchi Castle in Bracciano, Italy. Their Scientologist ceremony was attended by many Hollywood stars. But the day before, they already had officialized their marriage in Los Angeles.

Why Katie Had Divorced From Tom?

The Dawson's Creek star filed for divorce from her husband, Tom on 29, 2012 after five and a half years of marriage. Behind her divorce paper fillings, she had a reason as she wanted to protect her daughter Suri from the controversial religion that he practices.

On July 9, 2012, the duo had signed a divorce settlement sharing custody of their daughter. Holmes received $4.8 million in child support and $5 million for herself. As per their paper, Cruise has to pay Katie $400,000 per year in child support until the year 2024.

Her Other Love Affairs

Throughout her whole life, Katie has been in a few romantic relationships with famous celebrities. At first, she had a love affair with Dawson’s Creek co-stars, Joshua Jackson, from 1998 to 1999. In fact, Jackson was her first love.

Then she got engaged to Ameeican actor, Chris Klein in December 2003 after around three years of love romance. But they called off their engagement in March 2005 after being together for five-year.

Since splitting with Cruise, she was rumored to be dating an American singer-songwriter, Peter Cincotti in April 2013. Then after, she started dating Swedish actor, Alexander Skarsgard for a year.

Following their break up, she met American actor and musician, Jammie Fox in mid-2013. But recently in May 2016, the former couple called it quits after nearly six years of dating.

As of early July 2020, Katie Holmes has a staggering net worth of $25 million. She has accumulated her total fortune throughout her career as an actress, producer, model, and director.  Also, she further got fame from her marriage to Tom Cruise.

For her salary, Katie earned a salary of about $30,000 per episode as the main role in all 128 Dawson's Creek episodes. But at her peak, she made $175,000 per episode. In addition, she has endorsed many brands like Alterna Hair Care, Bobbi Brown cosmetics, Garnier Hair Care products,  Miu Miu 2009 Spring advertising campaign, etc.

Meanwhile, her former spouse Tom Cruise has an impressive net worth of $570 million as of early 2020. He credits most of his fortune to a professional career working as an American actor and producer. Moreover, he reportedly makes $50 Million per year for starring in dozens of major blockbuster movies.

Likewise, Tom's films have grossed more than $10.1 billion worldwide and over $4 billion in North America.