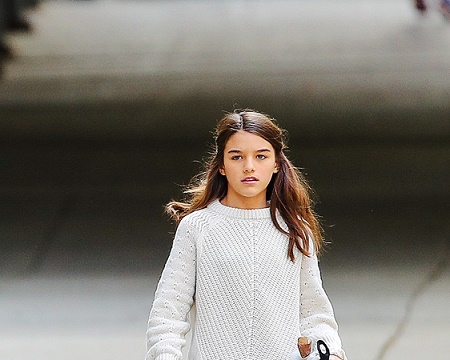 Celebrity daughter Suri Cruise just grabbed the media attention before her birth to celebrity parents’. She was born to Hollywood Superstar Tom Cruise and his third wife, Katie Holmes. Her father Tom is an American actor and producer who is known as the highest-paid actors worldwide while her mother Katie is also an American actress, director, and producer.

She was born on 18 April 2006 in Santa Monica, California, the United States at Saint John's Health Center. She is the grandchild of Mary Lee Pfeiffer, Kathleen A. Stothers-Holmes, Martin Joseph Holmes, Sr., and Thomas Mapother III. Further, she has two step-siblings named Connor Cruise and Isabella Cruise. She holds American citizenship and is of white ethnicity.

The 14-year-old celebrity daughter Suri is still to be married. She's a successful, famous daughter who might be single. She is prominent among the fans of her rich parents who are curious to know about her personal life.

But in the meantime, Suri is still very young to start any kind of romantic relationship with anyone. Nevertheless, she's also captured the hearts of several boys of her generation. So, she'd definitely find a very good boy in her life and fall in love with him at the right time in the future.

Now, Cruise still focuses on her study instead of engaging in relationships. She attended the New Village Leadership Academy and Avenues: The World School for her studies. Besides it, she has made media appearances with her mother on Vanity Fair Magazine titled Yes, Suri Does Exist, and World’s Best Dressed Poll.

Her superstar dad, Tom, and Mom, Holmes are no more together. They made their relationship public in April 2005 and became engaged in June 2005, only seven weeks after the meeting. Then they welcomed their daughter Suti before their wedding in April 2006 on the same date of their first anniversary.

On November 18, 2006, they tied the knot at the 15th-century Odescalchi Castle in Bracciano, Italy in a Scientologist ceremony. But the day before, they already had officialized their marriage in Los Angeles.

But the Dawson's Creek star filed for divorce on 29, 2012 after five and a half years of wedding. Behind her divorce paper filling, she had a reason as she wanted to protect her daughter Suri from the controversial religion that he practices.

On July 9, 2012, the duo had signed a divorce settlement having custody of their daughter. As per their paper, Cruise has to pay Katie $400,000 per year in child support until the year 2024.

How Rich is Suri Cruise?

Well, Suri Cruise just came into limelight as the celebrity daughter. She has not started her professional career but she enjoys the net worth of $500 thousand. Moreover, she is now enjoying the luxurious lifestyle out of her parent's incomes.

Meanwhile, her father Tom Cruise has an impressive net worth of $570 million as of early 2020. He credits most of his fortune to a professional career working as an American actor and producer. Moreover, he reportedly makes $50 Million Per Year for starring in dozens of major blockbuster movies.

Whereas her mother Katie Holmes has a total worth of $25 million. For her salary, Katie earned a salary of about $30,000 per episode as the main role in all 128 Dawson's Creek episodes. But at her peak, she made $175,000 per episode.