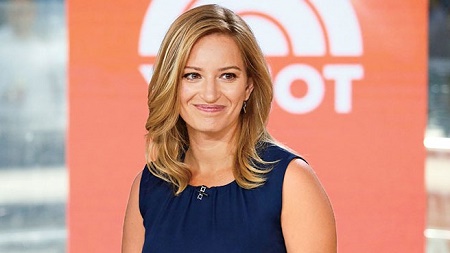 The recipient of the 2017 Walter Cronkite Award, Katharine Bear "Katy" Tur is an American broadcast journalist and author. Currently, she serves for NBC News as a correspondent based in New York City. Additionally, she is a TV anchor for MSNBC live.

Who is Katy Tur?

Katy Tur was born on 26th October 1983, in Los Angeles, California, the U.S as Katharine Bear Tur. Likewise, she is the daughter of renowned journalist Hanna Zoey Tur and his wife, Marika Gerrard. Addition to his family members, Tur has one brother named James.

Tur holds American citizenship with white ethnicity. As far as her education, she completed her graduation from Brentwood School in the year 2001. Then, she attended the University of California, Santa Barbara and completed a B.A. in Philosophy in 2005.

Moving on to Katy’s personal life, she is a happily married woman. She got married to her love of life or husband Tony Dokoupil. Well, Tony is an American Author and CBS Broadcaster from Miami (USA), by profession.

Tur and Dokoupil exchanged the wedding vows on October 27, 2017. The wedding was held in the middle of the desert in Utah. Since the marriage, they still have the same phase as before and also celebrated their 2nd wedding anniversary in 2018.

Moreover, Katy first met Tony in the makeup room when they both were working at NBC News for the news organization in 2015. The lovebirds then announced their engagement on 28 January 2017  after dating each other.

Tur and her husband currently live a happy life in New York City. Besides, there are no rumors of their extramarital affairs and divorce as well.

Past Affairs With Keith Olbermann

In the past, Katy had an affair with her former boyfriend Keith Olbermann, sports and political commentator and writer. They dated each other for about three years in 2006. And in 2009, the lovebirds cleared that they were no more in a love relationship.

Not only Katy, but her husband also had earlier married his first wife. He even shares his marriage connection with two kids, a son, and a daughter. However, the first identification of Tony's partner is still out of the press.

Yes, they have. Recently on 18th April 2019, Tur shared this happy news via Instagram that she and her husband finally welcomed their first baby together. Their baby bo name is Theodore "Teddy" Dokoupil who was born on early Saturday.

Her baby Teddy arrived, weighing 6 pounds, 5 ounces, and stretching almost 20-inches long, according to her Instagram post. Besides, Tony is already the father of two children from his first marriage.

Katy Tur has a net worth of $4 Million throughout her incredible career as an American author and broadcast journalist. Her capacity to engage the viewer and produce the most complicated news in simplest of way have gained her enormous amount of fame and respect in TV value.

As an author, Tur writes one book Unbelievable: My Front-Row Seat to the Craziest Campaign in American History in the year 2017. And gaining excellent feedback from the critics and their readers was good feedback.

Well, Tur has covered for a variety of news platforms under NBC. Now, talking about her salary, she makes $400 thousand with an additional benefit of $200 thousand from NBC. Furthermore, she has worked for many famous TV stations such as KTLA, News 12 Brooklyn, WIPX-TV, and Fox 5 New York.

On the other hand, her spouse Tony Dokoupil has amassed a giant net worth of $3 million working as a correspondent and co-host in one of the prestigious television stations.